"Future is hazy for marijuana and the workplace" 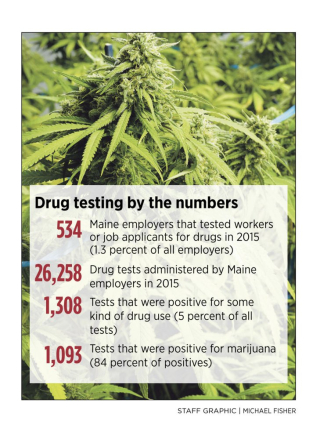 The title of this post is the punny, but spot-on, headline of this local article from Maine. Here are excerpts:

The difficulty of testing for marijuana intoxication and the complexity of Maine’s drug-testing laws are creating uncertainty among state officials and employers about the workplace impacts of a legal marijuana market. “It’s uncharted territory to a great extent,” said Julie Rabinowitz, director of policy, operations and communications for the Maine Department of Labor.

As Maine residents prepare to vote on marijuana legalization Nov. 8, state labor officials are meeting with their counterparts in Colorado and preparing to answer questions from employers about how passage of Question 1 would affect their drug-testing policies and efforts to maintain a drug-free workplace.  State labor officials plan to offer courses on how to spot impairment in the workplace, and they say it’s unclear whether employers will be able to continue screening prospective workers for marijuana use.

However, backers of the legalization measure say the proposed law leaves in place protections for employers, who would still be able to implement drug-screening requirements, maintain drug-free workplace policies and fire employees who show up for work intoxicated.

No state east of the Rockies has legalized marijuana, but Maine and Massachusetts – as well as Arizona, California and Nevada – will vote Nov. 8 on proposals to establish recreational cannabis markets.  Colorado, Washington, Oregon, Alaska and the District of Columbia have all legalized marijuana for adult use.  While Maine already has higher marijuana use rates than most other states and is home to a burgeoning medical marijuana program, the potential increase in access to the drug raises questions for employers about how it would affect workplaces.

And the referendum raises doubts about whether employers will continue to be able to reject job applicants who test positive for marijuana use that is no longer against the law, according to the Department of Labor.  The department has sought guidance from Colorado about how a recreational market could affect employers that drug-test employees or maintain drug-free workplace policies, and labor officials are still sorting through the Maine initiative and how it interacts with existing state law related to drug testing.  Employers, meanwhile, say they are taking a wait-and-see approach as they look for guidance from state officials on how to deal with employees who show up for work stoned....

The ballot initiative does not require employers to allow the use of marijuana in the workplace or prohibit them from disciplining employees who are under the influence, said Alysia Melnick, policy director for the Campaign to Regulate Marijuana Like Alcohol.

“Question 1 doesn’t change Maine employers’ rights to keep and maintain a drug-free workplace,” Melnick said. “Maine is and will continue to be an at-will state, meaning employers can terminate employees for just about any reason. If an employer had concerns about an employee’s performance or an employee was impaired on the job, they would continue to be within their rights to terminate that employee.”

Melnick said the initiative says that employers cannot discriminate against employees who use marijuana, but that doesn’t mean they have to hire them if they can’t pass a drug test.  “If someone is not performing their job well or seems impaired or is doing anything else that would cause an employer to fire them, they’d still be allowed to let them go,” she said. “What they can’t do is fire someone solely on their use of marijuana outside of the workplace.”

Even if passage of the referendum would not prohibit pre-employment drug screening, employers may find themselves walking a fine line between respecting employees’ rights to do what they want on their own time and a desire to maintain a work environment free of people using marijuana, according to labor experts.  That could leave employers in the uncomfortable position of trying to decide between tightening policies on positive test results to keep users out of the workplace or loosening them to avoid losing qualified employees.

That becomes tricky, according to labor officials and employers, because it can be more difficult to assess impairment from marijuana use than from the use of other substances, such as alcohol or opiates.  A positive marijuana test indicates only that someone has consumed in recent weeks, not whether he or she is actually impaired in the workplace.

With alcohol, a breath test can be used to determine if someone is above the 0.08 percent blood-alcohol content that is considered the threshold for impairment. But there is no agreed-upon blood-content level for tetrahydrocannabinol – or THC, the psychoactive ingredient in marijuana – that would determine impairment. THC can stay in a person’s system for weeks after consumption, and regular marijuana users could have high THC levels but not be impaired.

Given that state law now prohibits recreational marijuana use, some employers have considered any positive test a reason not to hire a job candidate. But if recreational marijuana use becomes legal, drug screening gets complicated. “Human resources officials are still in two modes: catch-up and reaction,” said Jim Reidy, a New Hampshire attorney who specializes in labor and employment law and is a member of the Society for Human Resource Management. “We’re in an interesting time when there’s a culture clash between individual rights and the rights of an employer to govern its rules of conduct and its expectation with regards to employees. We’re in a culture war between individual rights and the rights of the employers.”...

Maine labor laws allow employers to drug-test employees with approval from the state Department of Labor, but the regulations around testing are complex and exclude most Maine employers from implementing random testing policies. The number of Maine companies that drug-test employees is surprisingly low, even though the numbers have increased over the past decade, Rabinowitz said.

Of the state’s roughly 40,000 employers, about 500 do some form of drug testing, including pre- and post-hiring tests. There are fewer than 200 companies that do random drug tests of employees. That number is especially low because companies with fewer than 50 employees are not allowed to randomly test employees. Some companies – particularly those that employ commercial truck drivers or federal contractors – are required by federal law to drug-test employees.

In 2015, the state recorded the highest percentage of positive drug tests since regulated testing began in 1989. Last year, a total of 26,258 tests were administered, with 5 percent – or 1,308 tests – coming back positive. A total of 1,093 of those tests, or 84.1 percent, were positive for cannabinoids, according to the Department of Labor. While more than 500 companies do some form of drug testing, that doesn’t necessarily help when it comes to determining if an employee is impaired by marijuana while on the job, Rabinowitz said. “If you are smoking marijuana and test positive, but you smoked it recreationally on the weekend, how do I differentiate that from someone who smoked that morning and came to work high? It becomes a critical issue if marijuana is legalized recreationally,” Rabinowitz said. “It becomes a real difficult standard for an employer to enforce.”...

Colorado’s experience with marijuana in the workplace appears to indicate Maine has little reason for concern. After Colorado became the first state to legalize recreational marijuana in 2012 and commercial sales began in 2014, nothing changed in terms of employer rights with drug testing, said Andrew Freedman, director of marijuana coordination for the state. Employers can still drug-test employees and put in place drug-free workplace policies.

In 2015, the Colorado Supreme Court affirmed a lower court ruling that businesses can fire employees for the use of marijuana, even if it’s while they’re off duty. Freedman said he is not aware of any widespread concerns about drug testing in Colorado. He said about 13 percent of adults use marijuana, which is roughly the same as before legalization, suggesting there is no greater risk of workers being high while on the job. At the same time, however, he also has heard comments from employers that it is now harder to hire people around the age of 25 because they can’t pass a drug test....

Maine labor officials said they have looked to Colorado’s experience and contacted officials there for advice. But, they said, there are important differences between labor and employment laws in the two states and that Maine could run into problems not experienced out West.  Colorado doesn’t have the same limitations around drug testing that exist in Maine, for example, and it does not require employers to report to the state if they drug-test employees or job applicants.