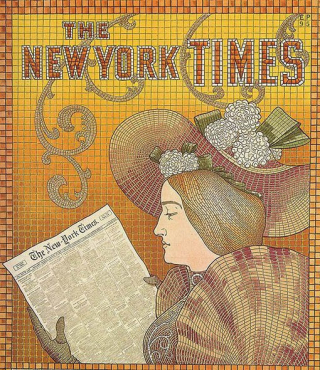 More than two years ago, as first reported here, this seemingly historic new New York Times editorial called for the legalization of marijuana under the bold headline "Repeal Prohibition, Again." At the time, I had thought this action by the Gray Lady's editorial board would mean that the marijuana reform movement would have a high-profile and powerful media champion and advocate.

Disappointingly (though perhaps not surprisingly), while the NY Times editorial board has been a a high-profile and powerful media voice on a number of other modern criminal justice reform issues, the Times editorial pages has been anything but bold (and has often just been silent) in the last two years on a wide range of notable state and federal marijuana reform issues. In 2016, for example, which has arguably been the most significant year (and after this election will be surely the most consequential year) in the modern history of the reform of state and federal marijuana laws (and which the New York Times has covered extensively as news), the NY Times editorial board until this week had put forward only one single editorial advocating for marijuana reforms.  (In telling contrast, the NY Times editorial board has had at least a dozen editorials advocating against forcefully capital punishment in 2016. )

I would think that if the editorial board was still truly committed to its advocacy in 2014 that the US should "Repeal Prohibition, Again," that it would be saying a whole lot more on this topic during this critical year.  Against that backdrop, I am disappointed (but I suppose not too surprised) that this new New York Times editorial headlined "Marijuana Lights Up State Ballots" is marked more by reporting than by advocacy. Here are excerpts:

People in nine states, including California, Florida and Massachusetts, will vote Nov. 8 on ballot proposals permitting recreational or medical use of marijuana. These initiatives could give a big push to legalization, prompting the next president and Congress to overhaul the country’s failed drug laws. This is a big moment for what was a fringe movement a few years ago. A Gallup poll released on Wednesday showed 60 percent of Americans support legalizing marijuana, up from 31 percent in 2000 and 12 percent in 1969.

The drive to end prohibition comes after decades in which marijuana laws led to millions of people being arrested and tens of thousands sent to prison, a vast majority of whom never committed any violent crimes. These policies have had a particularly devastating effect on minority communities. Federal and state governments have spent untold billions of dollars on enforcement, money that could have been much better spent on mental health and substance abuse treatment.

So far, Alaska, Colorado, Oregon, Washington and the District of Columbia have legalized recreational use of marijuana, and 25 states permit medical use. A recent Cato Institute study found that the states that have legalized recreational use have so far had no meaningful uptick in the use of marijuana by teenagers, or other negative consequences predicted by opponents. For example, in Colorado, drug-related expulsions and suspensions from schools have gone down in recent years. There has been no spike in drug-related traffic accidents and fatalities in Colorado or Washington.

On Election Day, voters in Arizona, California, Maine, Massachusetts and Nevada will consider proposals to allow recreational use. In California, which approved medical use in 1996, polls show that the measure is likely to win. In Massachusetts, a recent poll showed 55 percent of likely voters supporting legalization. In Arkansas, Florida, Montana and North Dakota, residents will vote on medical marijuana. If Florida voters say yes, other Southern states that have been resistant to liberalizing drug laws could reconsider their prohibitions, too.

Passage of these proposals should increase pressure on the federal government to change how it treats marijuana. The Obama administration has chosen not to enforce federal anti-marijuana laws in states like Colorado and Washington. But this bizarre situation can’t last — even as more states legalize the drug, state-licensed marijuana businesses remain criminal operations under federal law. Even if they are not prosecuted by the federal government, this conflict in their legal status creates immense problems....

States are driving the change in marijuana policy because they see the damage created by draconian drug laws on communities, families and state budgets. It’s time the federal government acknowledged these costs and got out of the way of states adopting more rational laws.

When I saw the headline for this editorial --- which, as I suggested before, seems to be mostly a report of reality and fails to do much editorializing --- I at least expected it to mention and link to the New York Times' prior 2014 editorial calling for the US to "Repeal Prohibition, Again." I do not believe that the New York Times has changed its editorial stance on this front, but they seem now almost intent to make sure nobody remembers their bold advocacy two years ago.

Moreover, this "editorial," while seemingly eager to note that "negative consequences predicted by opponents" of reform have not materialized, entirely fails to note or highlights that all of the positive consequences predicted by supporters of marijuana reform have come to pass: huge new tax revenues are being collected, economic development has been considerable, arrest rates have gone down dramatically, and adults have safe and legal access to their preferred medicine or recreational drug. Simply saying at the end here that the federal government should get "out of the way of states adopting more rational laws" (which the Obama Administration has largely done, though Congress could and should do it more formally) is about the weakest tea support for reform I could imagine.

I suppose that when a paper's nickname is the "Gray Lady," I was foolish to expect or hope it would act or advocate like even a young smart conservative advocate (whom polls show support medical marijuana reform 10 to 1 and full marijuana reform 3 to 1). Still, I feel now as though the 2014 editorial headline really should have been "Repeal Prohibition, Again.... but do not expect the Gray Lady to really try to help make that happen anytime soon."