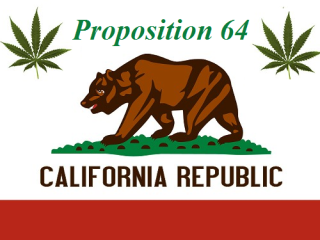 This press release from the Institute of Governmental Studies at UC Berkeley, which is titled "IGS Poll Finds Support for Gun Control, Marijuana Legalization," suggests that the ballot initiative in California to legalize marijuana could pass by a substantial margin.  Here are some of the particulars:

California voters overwhelmingly support a sweeping gun control measure on the November ballot, including strong majorities of both parties and independent voters, according to a new poll released today by the Institute of Governmental Studies at the University of California, Berkeley. On another hot-button social issue that will be on the ballot in the fall, voters also strongly support legalizing marijuana for recreational use, the survey found.

The poll used online English-language questionnaires to survey 3,020 respondents from June 29 to July 18. All respondents were registered California voters, and the responses were then weighted to reflect the statewide distribution of the California population by gender, race/ethnicity, education and age....

Proposition 64 would legalize recreational marijuana use, with regulation by specified government agencies.  Almost two in three respondents (63.8 percent) supported that idea, a level of support extremely similar to last year, when the IGS Poll asked the identical question.  Support included 73.8 percent of Democrats and 62.2 percent of independents.  Republicans opposed legalization, 53 percent to 47 percent, but this was less GOP opposition than was registered by the same question last year.  Last year Republicans opposed legalization by 61.6 percent to 38.4 percent.

The reported movement in these poll numbers for Republicans is an interesting and possibly very important development, and I also found interesting from the reported results that there was not a significant gender gap in support for legalization. If these poll numbers hold up and California's legalization initiative win by a huge margin, I think that fact will just further add evidence that the winds of public opinion aregrowing ever more strongly for the repeal of blanket marijuana prohibition throughout the United States.

And then there are the drugs that aren't even on Schedule 5, so they must be totally safe and have lots of accepted medical uses--alcohol and tobacco, for example.