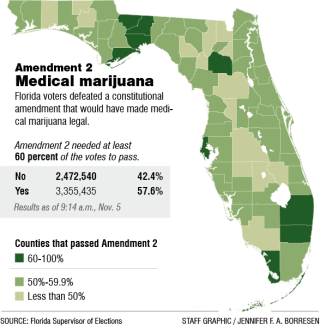 This new local article, headlined "Medical marijuana war heads to next battle," reports on various recent developments in Florida that reinforce my view that the Sunshine State has become in 2016 one of the most fascinating states to watch for both proponents and opponents of marijuana reform.  Here are some of the details:

Marijuana was sold legally in Florida for the first time this week since it was outlawed by the federal government in 1937.

In a staid Tallahassee storefront more akin to a doctor's office than a head shop, Dallas Nagy, a Tampa-area native with chronic seizures and muscle spasms, plunked down $60 for a non-euphoric strain of marijuana on Tuesday.  "I thank you for the hope of getting better," Nagy said at the opening of Trulieve, the first medical marijuana dispensary in the state.

The milestone, hailed by legalization activists, some doctors, owners of nascent pot nurseries and the parents of children with debilitating ailments, is really just the beginning of Florida's battle over marijuana laws.  Groups on both sides of the medical marijuana debate are battling it out over an amendment on the November ballot that would give access to marijuana with higher levels of THC — the chemical that creates a user's "high" — for a wider range of illnesses.

Anti-drug activists and law enforcement say the amendment would lead to de facto legalization of the drug. Amendment 2, as it will appear on the ballot, makes patients with "debilitating medical conditions" eligible – a vague term ripe for abuse, they say. "It's unlimited, so if you have headaches a doctor could say marijuana could alleviate your headache," said Christina Johnson, spokeswoman for Drug Free Florida, a group fighting the amendment.

Along with "debilitating conditions," the amendment states that patients with glaucoma, HIV/AIDS, post-traumatic stress disorder, amyotrophic lateral sclerosis (ALS), Crohn's disease, Parkinson's disease or multiple sclerosis would be eligible for medical marijuana.  The amendment doesn't specify in what form the drug could be sold.

The fight over Amendment 2 is already drawing big bucks on both sides.  Drug Free Florida got a boost this week in the form of an $800,000 contribution from Carol Jenkins Barnett, a major Publix shareholder and the daughter of the founder of the Lakeland-based grocery store chain.  The group has about $1.7 million in cash on hand.

On the other side is United for Care, a group funded and promoted with the help of Orlando trial attorney John Morgan, which rounded up signatures to get the amendment on the 2016 ballot.  A similar effort in 2014 failed, receiving 57 percent of the vote, 3 percent shy of the 60 percent required to pass.  Over the past two elections, the group has raised and spent more than $11.5 million.  A Quinnipiac poll from May showed 80 percent support for the amendment among likely voters.

The success or failure of Amendment 2 could have a huge impact on Florida's small, legally sanctioned marijuana industry, which is still in its infancy.  Jason Parnell, chief operating officer of Trulieve, said there are currently enough patients to serve and stay in business under the existing law, but the additional patients opened up by the amendment would allow them to offer lower prices.  "If you have a bigger pool you can have economies of scale, and we can do price compression," said Parnell, whose current low-THC products include oils, gelcaps and a smokable version....

But for people such as Tallahassee resident Rosalyn Deckerhoff, access to cannabis is essential to providing her son Barrett, 20, who suffers from epilepsy, some relief and a better life.  She's exhausted all other options. "We've done everything medically in the book for the last 20 years, including brain surgery," Deckerhoff said.

Two years ago she urged the Legislature to pass a bill allowing patients with cancer or debilitating diseases that cause frequent seizures like epilepsy to legally obtain a noneuphoric strain of marijuana known as "Charlotte's Web."  Because of red tape and legal challenges from growers and dispensaries seeking licenses to distribute the drug, it wasn't until this week that it became available to patients.

Subsequent laws will allow terminally ill patients access to marijuana with more potent tetrahydrocannabinol, or THC, the main active chemical in pot.  To obtain medical pot in Florida, a patient must be diagnosed with a qualifying condition by a doctor and receive a recommendation for medical marijuana by a doctor registered with the state Office of Compassionate Use.

Doctors must complete a course to receive a license from the office. As of July 22, there were 82 doctors who have taken the eight-hour course, including 10 in Central Florida, according to the department. In addition, doctors recommending medical marijuana must have a minimum three-month history of treating the patient.

As this article details, Florida is already, in a sense, a medical marijuana state thanks to the work of the state legislature AND a majority of Florida voters two years ago voted in favor of the state having a much more "robust" form of medical marijuana legalized. But with a 60% vote requirement for approval, advocates for more robust reform will need to convince a super-majority of voters that existing state efforts are not good enough. And, unlike in some other states, it appears that both supporters and opponents of the proposed ballot reform will be able to run well-funded campaigns.

Moreover, Florida is historically a critical "swing state" in national elections, and I am certain the major Prez candidates know well that opposing a sizeable majority of Florida voters have already revealed their support for significant reform. Thus, I think it likely that all the candidates when campaigning in Florida will be asked about the state's 2016 ballot initiative, and it seems possible (perhaps likely?) that Libertarian candidate Gary Johnson will not be the only one to express support for it.