Should I care more about (and is anyone studying closely) state marijuana decriminalization reforms? 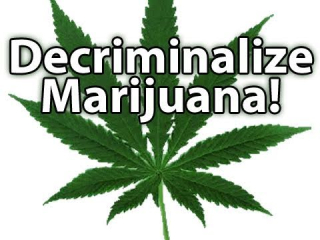 The question in the title of this post is prompted by this local article from Illinois headlined "Rauner reduces punishment for minor pot possession from jail to citation." Here are the details:

Getting caught with small amounts of marijuana will result in citations akin to a traffic ticket instead of the possibility of jail time under legislation Republican Gov. Bruce Rauner signed into law Friday.

Rauner's approval of the decriminalization measure comes after he used his amendatory veto powers last year to rewrite similar legislation he argued would have allowed people to carry too much pot and fine violators too little.

Supporters incorporated his proposed changes, and under the new law those caught with up to 10 grams of marijuana will face fines of $100 to $200. Individual municipalities could add to the fines and implement other penalties, such as requiring offenders to attend drug treatment. Citations would be automatically expunged twice a year, on Jan. 1 and July 1.

Under previous Illinois law, possession of up to 10 grams of pot was a class B misdemeanor that could result in up to six months in jail and fines of up to $1,500.

The law also would loosen the state's zero-tolerance policy for driving under the influence. Before, a driver could be charged if any trace of marijuana was detected, even if it was ingested weeks before and the driver showed no signs of impairment. Under the new law, drivers won't be charged with DUI unless they have 5 nanograms or more of THC in their blood, or 10 nanograms or more of THC in their saliva.

The state law follows a measure enacted by Chicago in 2012 that allows police to issue tickets of $250 to $500 for someone caught with 15 grams or less of marijuana. The state law wouldn't override laws in cities such as Chicago that already have fines in place, but would create uniformity across the state for towns that don't have such measures on the books.

The effort marks a rare point of agreement between Rauner and Democrats. Both sides seek to cut the burden on the court system and overhaul the state's approach to criminal justice. "We applaud Gov. Rauner and the legislature for replacing Illinois's needlessly draconian marijuana possession law with a much more sensible policy," Chris Lindsey, senior legislative counsel for the Marijuana Policy Project said in a statement. "This commonsense legislation will prevent countless citizens from having their lives turned upside down by a marijuana possession arrest."

I tend to view so-called "decriminalization" of marijuana to be something of a misnomer because a person still risks fines and other problems from marijuana possession even after laws are changed in this way. Moreover, I think only some form of legalization enhances the benefits of serious marijuana reform. But, especially if there is developing research showing that decriminalization significantly reduces the economic and human costs of marijuana prohibition, perhaps I should get more excited when more states join the decriminalization bandwagon.

Absolutely you should care.

As you know, there is a huge difference between being issued a civil citation and being arrested and charged with a crime. Many of the collateral consequences of marijuana prohibition are tied to arrests/criminal convictions (fed student loans, housing, jobs, etc.). You're right that decriminalization laws don't do away with all the ills associated with prohibition, but at the very least they will prevent thousands of criminal charges from being brought against individuals whose only "crime" was being in possession of a modest amount of a substance that is safer than alcohol while we work on getting a regulated market.

Let's not let the perfect be the enemy of the good.