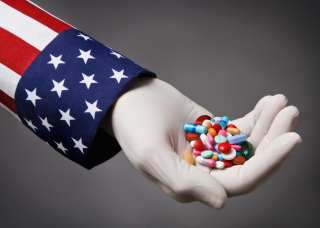 The arrival of medical marijuana in Massachusetts and other states is changing the way doctors prescribe conventional medications, a study published Wednesday reports.

That translated to about $165 million less spent on prescription drugs in just one year in the Medicare program, which provides health insurance for older adults, according to the study published in the journal Health Affairs. Analysts said the findings are especially significant coming amid the nation’s opioid crisis and campaigns to reduce the prescribing of potentially addictive painkillers.

W. David Bradford, a health economist at the University of Georgia and the study’s senior researcher, said an ongoing review of the government’s Medicaid database, which includes a younger population more likely to use marijuana, suggests an even stronger correlation between prescribing trends and medical marijuana laws. Medicaid insures mostly younger patients who are poor and disabled. “This research says there is evidence that physicians are responding as if marijuana is medicine, and as if there is clinical benefit,” Bradford said.

The researchers analyzed millions of drugs prescribed by physicians from 2010 through 2013 in the Medicare Part D database. They focused their analysis on drugs that treat conditions for which marijuana might be an alternative treatment, including anxiety, depression, glaucoma, nausea, pain, psychosis, seizures, sleep disorders, and a muscle control disorder known as spasticity. They found that for all conditions, except glaucoma and spasticity, fewer prescriptions were written when a medical marijuana law was in effect.

To confirm the link to marijuana laws, and not other factors, the researchers compared results from the states with medical marijuana to states that had not legalized it. They did not see a similar decline in prescribing in states without marijuana laws. As a further test, the researchers selected four drugs prescribed for conditions for which there are no studies suggesting benefit from marijuana treatment. Those drugs included blood-thinners, antibiotics, antivirals to treat the flu, and a drug used in dialysis. They found no decline in prescriptions for these drugs....

Avi Dor, a health economist and professor of health policy and management at George Washington University’s Milken Institute, called the study “impressive and timely,” given concerns about prescription opioid abuse. Opioids are often prescribed for many of the conditions the researchers studied. “We can’t be sure about the causality [in the study], but the evidence is strong in favor of the marijuana laws leading to the substitution away from certain drugs,” said Dor, who was not involved in the research. “We just don’t know if, over time, the effects they find will wash out or become amplified,” Dor said. “Physicians and their patients are only beginning to experiment with the new therapeutic alternative of medical marijuana.”

The Health Affairs study estimated that if medical marijuana had been available in all states in 2013, the Medicare prescription program would have saved about $468 million because of fewer prescriptions for just that year -- an amount equal to one-half of 1 percent of Medicare prescription spending that year. But the researchers acknowledged that savings for Medicare might translate into more costs for patients who pay for medical marijuana out of their own pockets, because insurance doesn’t cover the drug.

Dr. Kevin Hill, an assistant professor of psychiatry at McLean Hospital and Harvard Medical School who studies marijuana, said the Medicare savings are important. But he noted physicians remain reluctant to recommend marijuana to their patients because they feel the evidence supporting its use is insufficient, or they are concerned about legal ramifications if they suggest a drug the federal government classifies as dangerous. “Medical marijuana may reduce prescription costs in some cases, but there is a risk that medical marijuana may be used for conditions that are not supported by evidence,” Hill said.