As a few NFL players continue to talk up medical marijuana, what are the marijuana reform views of all the new NBA multi-millionaires? 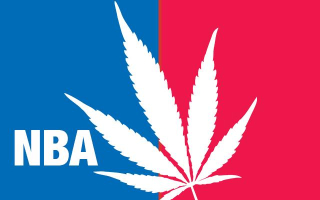 Long-time readers are familiar with a number of posts in this space discussing a number of current and former NFL players talking about medical marijuana as a alternative to traditional painkillers as a way to treat chronic pain (and perhaps brain injuries) from thier playing days.  Another recent article on this front comes from PBS in this article, headlined "For some NFL players, ban on medical marijuana is a real pain," has has this overview:

Percocet or pot?  An increasing number of Americans are choosing to use legalized cannabis instead of highly addictive opioids to control chronic pain but not in the NFL where a blanket ban is still in place.   A group of retired players are working toward changing that, knowing firsthand what it's like to live on pills.

It makes great sense that past and present NFL football players are at the forefront of some discussions about medical marijuana, and I continue to believe that these athletes could play a huge role in legitimating medical marijuana use in the years ahead.  But during a week in which sports talk-radio and the sports pages are filled with reports of dozens of NBA altheles signing new contracts paying them tens of millions of dollars(!), I am wondering whether stars from another prominent US professional sports league might eventually play some role in legitimating recreartional marijuana use.

Notably, one former NBA player has recently suggested that up to 80% of all NBA players use marijuana.  Even if this number is significantly inflated and, say, only 25% of NBA players use marijuana recreationally, this would still mean that there are likely at least a dozen marijuana users among the 50+ players who have recently signed free agent contracts that will be paying them well over ten million dollars per year for being elite athletes.

For a host of financial/personal reasons, current NBA players are wise not to say a word about marijuana use or the national marijuana reform movement.  With tens of millon dollars at stake in their new contracts (not to mention future endorsement or broadcasting interests), there is no reason an active players would or should, right now, feel comfortable talking about marijuana use among NBA players or even openly giving a donation to a marijuana research or reform organization.   But, given the reasonable assumption that the NBA now has now the greatest percentage of multi-millionaire employees who use marijuana and still perform terrifically at their job, I think marijuana reform organizations ought to be looking to that league for potential future reform advocates.