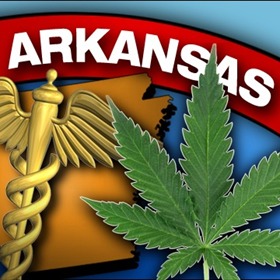 This AP article, headlined "It’s official: Arkansas will vote on medical marijuana in November," provides the interesting details on another state now sure to be considering marijuana reform through initiative this fall. Here are the dynamic details:

A proposal to legalize medical marijuana in Arkansas qualified for the November ballot on Thursday, putting the issue before the state’s voters for the second time in four years. The secretary of state’s office said it had verified at least 77,516 of the more than 117,000 signatures submitted for the proposed initiated act by Arkansans for Compassionate Care were from registered voters.

Arkansas voters narrowly rejected a similar medical marijuana proposal in 2012, and this fall could face two competing legalization measures. Melissa Fults, campaign director for Arkansans for Compassionate Care, repeated her call for the sponsor of the competing proposal to abandon his efforts.

“It does complicate it tremendously if he does turn in because it’s going to greatly decrease our chances of either one passing,” Fults said. The measure from Fults’ group would allow patients with a range of medical conditions and a doctor’s recommendation to buy marijuana from dispensaries. Unlike the competing proposal, it would allow patients to grow their own marijuana if they don’t live near a dispensary.

David Couch, the sponsor of the competing measure, said he planned to submit petitions for his proposed constitutional amendment Friday morning and said he didn’t believe having two marijuana proposals on the ballot would doom either. “If you support medical marijuana and you believe that sick people should have this medicine, you should say vote for both,” Couch said. “That’s what I’m going to say.”

The conservative Family Council Action Committee, which campaigned against the marijuana proposal in 2012, said it would review the petitions for a potential legal challenge and was also considering challenging the proposal’s language in court. “This same issue was defeated in the election of 2012, and I believe the people of Arkansas are wise enough to see through this sham and vote it down again,” Jerry Cox, the committee’s executive director, said in a statement.

Republican Gov. Asa Hutchinson, a former head of the federal Drug Enforcement Administration, said he opposed the measure and urged members of the medical community to share concerns they may have about the legalization efforts. “I believe that while we want to provide medicine to anyone who needs it, this opens a lot of doors that causes more problems than it solves,” Hutchinson told reporters.