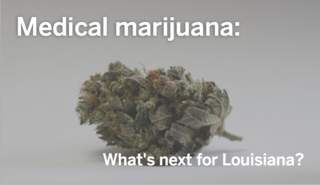 There has been some enduring debate and uncertainty as to whether Louisiana should "count" as one of the two-dozen-plus states that have enacted significant medical marijuana reforms.  For a number of reasons, and especially since recent legislative reforms to the state's medical marijuana rules, I think Louisiana should count in any accounting of such states.  And this recent local article, headlined "Louisiana gearing up for marijuana business: How much might LSU, Southern, companies profit? How will it be distributed?," suggests that now shortage of Louisiana officials and institutions are now considering the state's work in this space very seriously. Here are highlights from the interesting article:

Growing up on a cotton farm in Missouri in the 1950s, Bill Richardson didn’t know a thing about marijuana. Nobody talked about it, he never saw it and he certainly never smoked it. “I didn’t inhale,” Richardson, LSU’s 71-year-old vice president for agriculture and dean of the College of Agriculture, said with a smile in a recent interview.

Richardson has become the unlikely leader of an effort to get LSU into the pot business. Last month, the Louisiana Legislature approved a bill that legalizes the use of marijuana for people suffering from a specific list of debilitating diseases. The so-called medical marijuana legislation authorizes LSU and Southern University to grow and produce cannabis to be consumed in a liquid form. (Hold the “Cheech and Chong” jokes — it cannot be smoked, and no, they won’t be offering samples.)

The boards of both universities appear likely to give the go-ahead for pot cultivation. It’s not clear yet, however, who will provide the $10 million to $20 million needed to produce the drug, which will be sold at 10 standalone pharmacies designated by a state agency. None of the people wanting to be treated by pot will have access to it for at least 18 months.

When the Legislature legalized marijuana for patients suffering from 10 specific diseases, lawmakers told emotional stories about the children and loved ones who stood to benefit. Opponents, meanwhile, warned darkly that Louisiana was heading down a slippery slope toward legalizing a dangerous drug. Lost in the debate is what the measure will mean for LSU and Southern — and the private companies that are now emerging to try to profit from the new industry by partnering with the universities.

The legislation by state Sen. Fred Mills, R-Parks, gave LSU and Southern no money to launch this new venture, meaning they will have to rely on private companies to buy the seeds, hire scientists, rent or build growing facilities and pay for all the other costs. “All of the money would have to come from venture capitalists, or you’d have to sell bonds,” said Adell Brown, the point person at Southern as the university’s interim chancellor for its Agricultural Research and Extension Center. Neither Brown nor Richardson can say yet how much it will cost to get the business running at full speed, but both agree that it probably will take at least $10 million.

Brown and Richardson both report getting calls from representatives of companies that want to rent or sell land or provide a growing facility. Others are inquiring about financing the entire venture with the expectation of earning a profit. “It’s a money-making venture,” Brown said.

Neither he nor Richardson knows yet where they might grow the pot, but the universities are not likely to do it together. (The Legislature has authorized them to cultivate the marijuana because of federal laws prohibiting the transport of marijuana across state lines.) The University of Mississippi grows marijuana for research under a special federal license on the edge of its campus, in a field surrounded by two fences and armed guards, said an Ole Miss spokesman. “My recommendation is that it not be grown on campus, for the PR,” Richardson said.

He expects that LSU’s Board of Supervisors will authorize the growing of marijuana at its June 24 meeting. “It’s something we can do,” Richardson said, adding that he sees this as an opportunity for the university to duplicate its pioneering work with rice and other crops. Besides, “over the past year, I’ve heard enough testimonials of the medicinal effects to believe that the benefits outweigh the negatives. Plus, there may be some opportunities to create an income stream to help us balance our budget.”

Brown said he expects Southern’s board to approve the venture at either its June or July meeting. “It will be a highly sophisticated and self-controlled facility with the proper protocols for security,” he said. “We have faculty members who have done work with a lot of different crops that are of the same family.”...

While LSU and Southern are gearing up, several state entities are working to provide the regulatory framework for everyone who wants to be involved. The Louisiana State Board of Medical Examiners already has drafted its rules for doctors who want to apply to treat patients suffering from cancer, multiple sclerosis, epilepsy and seven other diseases, including HIV and AIDS. No doctor can treat more than 100 patients, said Eric Torres, the executive director of the medical board. Mills’ legislation, Senate Bill 271, requires doctors to “recommend,” not “prescribe,” the drug, to get around federal laws.

The state Department of Agriculture and Forestry is drafting rules that will govern the growing and production of the medical marijuana. The Legislature has authorized money for the agency to hire outside labs to make sure the marijuana is free of pesticides and heavy metals and has the least possible THC — the active ingredient that makes people high — and to hire staff to regulate the new business. “We have to make sure that end product is safe,” Agriculture Commissioner Mike Strain said in an interview.

The end product is what the patients actually will buy. “The marijuana cannot be inhaled,” said Jesse McCormick, of the Louisiana Cannabis Association, who lobbied to pass SB271. “It could be a cream. It could be in liquid form — tincture. It could be a gel cap. It could be a vitamin gummy. If you’re going to a dispensary to find ‘bud’ — well, you won’t.” The Louisiana Board of Pharmacy will decide on the drug’s final form and is leaning in favor of allowing LSU and Southern to make that decision. “Let the producers be as creative as they wish,” said Malcolm Broussard, the executive director of the board.

The 17 members of this Baton Rouge-based board — who are appointed by the governor to six-year terms — also will decide who will operate the 10 pharmacies throughout Louisiana that will sell the medical marijuana. Under state law, they cannot be part of a normal drugstore, although Broussard said it’s possible that the therapeutic drug could be sold in a convenience store. That store could not also sell prescription drugs, but it could offer over-the-counter drugs, he said.

Next year’s licensing decision will put a spotlight on a board so obscure that Broussard said he had never before been interviewed by an Advocate reporter during 17 years as executive director.