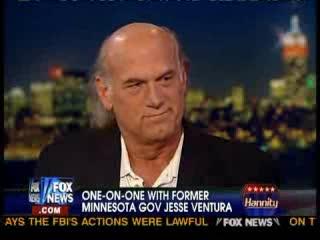 Jesse Ventura, the former governor of Minnesota, has this notable new MSNBC commentary headlined "If pot is legal, we don’t need these absurd restrictions." The commentary complains not only about marijuana prohibution, but also all the limitation on marijuana legalization in both medical and recreational states. Here are excerpts from the piece:

Take Colorado for instance. If you're a Colorado resident, you can buy up to 1 ounce of marijuana at one time, but if you're visiting from another state, you can only purchase up to ¼ ounce at a time. Name one other legal substance that is regulated in this manner. If I can buy as many cigarettes as I want, then why, in a state like Colorado where marijuana is legal, can I not empty my bank account in a retail marijuana shop if that's what I want to do?

Think about alcohol for a minute. It's completely legal to buy as much of it as you want. If you drink too much, it can cause liver damage, addiction, even death. According to the CDC, in 2014 alone, more Americans died from alcohol-induced causes (30,722) than from overdoses of prescription painkillers and heroin combined (28,647). So, there were more alcohol related deaths in 2014 than heroin related deaths (and we keep hearing that there's a national heroin epidemic in this country), yet I am not limited to the amount of alcohol I can purchase.

If it's such a deadly substance, then shouldn't it be regulated more? Could you imagine if the government did such a thing? Let's limit the amount of beer to a six-pack per person per day and see how much rioting there'd be in the streets! Look, if a substance is legal to purchase, then I should be allowed to purchase as much of it as I so desire. To me, that's the definition of a legal substance....

I'd like to know what lawmakers are so afraid of when it comes to actually legalizing marijuana. What are the side effects of this medication? Patients feel better. It helps people manage chronic pain without addiction or death. We just lost Prince, one of the greatest musical icons of my home state of Minnesota, due to prescription pill overdose. If his doctor prescribed him marijuana, I believe he would still be with us today. And as a "recreational" substance, name me one person who smokes weed and then wakes up the next day not remembering committing violent or aggressive acts, which is so typically associated with alcohol use.

I'm a purist. If a substance is legal, it should be legal. Yes, let's tax it, let's make money off of it, but let's not regulate it to the point where people live in fear of having too much of this "legal" substance on them at a given moment. When people buy cigarettes, they don't worry if they have too many packs in the trunk of their car, yet there is not one medical benefit of smoking cigarettes. It's common knowledge that cigarettes slowly kill you. So addictive substances that kill people: perfectly legal. A medical substance that has proven time and time again to have practically zero side effects and can actually help people: not fully legalized, and many Americans risk going to jail if they use it.

On Election Day, I'm voting for people who will actually legalize this incredible plant. We don't know what's in our future or what's in our children's futures. Our loved ones could be diagnosed with cancer, Huntington's, ALS, epilepsy, glaucoma, Crohn's disease, PTSD, Parkinson's, fibromyalgia or any number of illnesses that cannabis treats. It's in all of our best interests to make cannabis legal for every American.

I love his comment, "Name one other legal substance that is regulated in this manner." I keep stressing this point as well. Plus, let's not forget about the insane tax rates and the recent news that California wants to tax medical marijuana. Last time I checked I could get opiates tax free at my pharmacy.