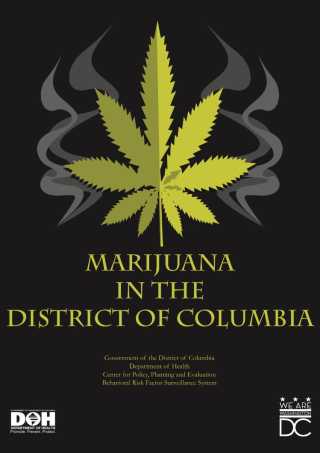 The District of Columbia is a unique locale with unique laws and practices in many arenas. But, as highilighted by a big new report issued by the DC's Deprtment of Health, the District's relationship with marijuana law, policy and reform has much in common with a number of other jurisdictions.  This big new report, available here, is titled "Marijuana in the District of Columbia," and here is the report's executive summary:

In recent years, marijuana related policies have gone through many transformations throughout the United States, with the District of Columbia being no exception.  This report provides insight through current research and data that outlines the disadvantage, benefits and societal ramifications that accompany decriminalization and legalization of marijuana in the District of Columbia.  Factors that have been analyzed include short-term and long-term health consequences, public safety issues like driving while under the influence of the substance, marijuana’s co-use relationship with other drugs, and effects on fetal, infant, and adolescent development.

• Marijuana was the second most commonly detected drug in traffic accidents that resulted in fatalities, District of Columbia in 2012.

• Medical marijuana has demonstrated promising results for various ailments, including neuropathic pain, nausea due to chemotherapy, and muscle spasms.

• There is some evidence that marijuana use may increase cancer risk.

• Among individuals at risk for mental illness, marijuana use may worsen symptoms.

• 8.9% of marijuana users will transition from casual use to dependence.

• Cigarette use and binge drinking are significantly higher among marijuana users than nonusers.

• Marijuana use has been associated with a decline in IQ when regularly used among individuals under the age of 18.

• Throughout the U.S., marijuana possession arrests tend to occur significantly more among African Americans than any other race/ ethnicity despite rates of use are fairly similar across all categories.