"US House Votes to Give Medical Marijuana to Veterans" 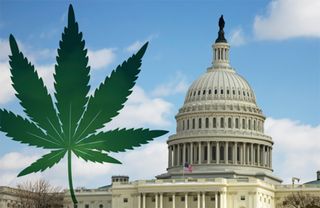 The title of this post is the headline of this notable report authored by Tom Angell explaining a notable vote today in Congress. Here are the notable details:

By a vote of 233-189, representatives approved an amendment preventing the Department of Veterans Affairs (V.A.) from spending money to enforce a current policy that prohibits its government doctors from filling out medical marijuana recommendation forms in states where the drug is legal. The language is now attached to a bill funding the V.A. and military construction efforts through next year.

The U.S. Senate is expected to vote on its version of the legislation later on Thursday. Medical cannabis protections for veterans were added to that bill last month in bipartisan vote of 20-10 in the Senate Appropriations Committee. It is not expected that any senators will offer floor amendments to strike the marijuana provision before passage.

“One of the great concerns we have is how the two million young Americans who were sent to Iraq and Afghanistan reintegrate back into society,” Rep. Earl Blumenauer (D-OR), the House amendment’s sponsor, said in a floor debate early Thursday morning. “What I hear from veterans that I talk to is that an overwhelming number of them say that medical marijuana has helped them deal with PTSD, pain and other conditions, particularly as an alternative to opioids.”

Under current V.A. policy, military veterans have to go to separate private doctors to get medical marijuana recommendations, which can be costly and time-consuming. “Those patients who want to pursue medical marijuana have to go ahead and hire a physician out of their own pocket,” said Blumenauer. “Not dealing with the medical professional of their choice, their V.A. doctor, who knows them the best.”

But there was some reluctant disagreement on the House floor. “I understand that the country is evolving on this issue as many states, including my own, have moved forward on medical marijuana,” said Rep. Charles Dent (R-PA), whose home state just became the 24th in the U.S. with a comprehensive medical marijuana law. “As a member of this House, I’m a bit uncomfortable, however, in trying to dictate policy on marijuana without guidance from Food and Drug Administration, National Institutes of Health and other medical professionals.”

But Blumenauer took exception to that characterization. “This amendment does not dictate treatment options. It’s not interfering. It’s not superimposing anybody’s judgement about the merits of marijuana. It simply enables V.A. doctors and patients to interact with state-legal marijuana systems,” he said. “We should not be limiting the treatment options available to our veterans.”

Last year the Senate approved the Fiscal Year 2016 version of the V.A. spending bill, with similar medical cannabis protections for veterans attached, but the House narrowly defeated a move to add the amendment to its version of the legislation by a vote of 213-210. As a result, the provision was not included in the final omnibus appropriations package signed into law by President Obama in December.

Since then, momentum on medical cannabis and broader marijuana law reform issues has continued to increase. Last month, for example, Pennsylvania became the 24th state in the U.S with a comprehensive medical marijuana program. This month, both chambers of the Louisiana State Legislature and the Ohio House of Representatives approved medical cannabis bills.

The U.S. House measure also would have passed last year if two medical marijuana supporters hadn’t voted against it. Rep. John Garamendi (D-CA), admitted at the time that he misread the amendment and voted the wrong way. Another supporter, Rep. Morgan Griffith (R-VA) said he voted no because the measure didn’t go far enough in his view. With those two votes flipped, the result would have been 212-211.

The V.A. policy disallowing its doctors from recommending medical marijuana in states where it is legal actually expired on January 31 but, under the department’s procedures, the ban technically remains in effect until a new policy is enacted.

Advocates expect a new policy soon, but aren’t sure what it will say. In February 2015, a top V.A. official testified before a House committee that the department is undertaking “active discussions” about how to address the growing number of veterans who are seeking cannabis treatments.

Separately, a trio of Democratic senators submitted an additional amendment this week intended to spur medical cannabis research by the V.A. The V.A., in partnership with the National Center for Posttraumatic Stress Disorder may “conduct clinical research on the potential benefits of therapeutic use of the cannabis plant by veterans,” reads the amendment offered by Sens. Kirsten Gillibrand (NY), Cory Booker (NJ) and Barbara Boxer (CA).

The senators want the government to look into the use of cannabis “as a treatment to achieve and maintain abstinence from opioids and heroin.” The proposal directs the secretary of veterans affairs to submit a report on efforts to expand such research within 180 days. It is not yet clear if the amendment will receive a vote on the Senate floor.