In tradition of George Washington and Thomas Jefferson, Libertarians nominate for Prez a cannabis businessman in Gary Johnson 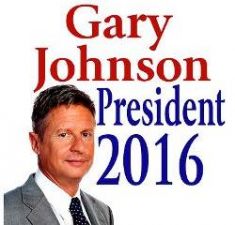 For a host of reasons, I am pleased to see the Libertarian Party getting more than its usual attention this election cycle; and, as reported here, this past weekend the Libertarian Party selection Gary Johnson and William Weld to be their Prez and VP candidated for 2016.   Supporters of marijuana reform likely know the name Gary Johnson, and this recent AP article headlined "This marijuana-loving Libertarian staking claim as Trump alternative," highlights some of the reasons why. Here are excerpts:

Johnson is [going to be] relying on an intensifying schedule of media appearances to boost his name recognition in an effort to reach the necessary 15 percent threshold to qualify for the presidential debates this fall.  “We cannot go into a battleground state and compete,” said Johnson’s senior strategist Ron Nielson, citing the high cost of running a campaign in states like Florida or Ohio.  The Johnson campaign will instead focus its resources on cheaper states where libertarians have done well in the past, places like Alaska, maybe New Hampshire, he says.

Yet Trump’s Republican critics don’t necessarily need to find a candidate who can win. Many are seeking a legitimate protest candidate where they could focus their anti-Trump energy. Should that candidate earn even a few percentage points in key states this fall, it could hurt Trump’s chances. “Gary will be an outlet for millions of Americans who just can’t fathom the idea of voting for Hillary Clinton or Donald Trump,” said Ed Crane, who co-founded the libertarian-leaning Cato Institute and now runs a super PAC he says may support Johnson “down the road.”...

Johnson represents a set of policies that do not line up perfectly with Republicans or Libertarians. He embraces fiscal conservatism, but not to the lengths that some hardline anti-government libertarians would like. He considers himself a liberal on social issues, supporting same-sex marriage and abortion rights. And he supports a non-interventionalist foreign policy that focuses on America’s challenges at home.

Many know him best for his repeated calls to legalize drugs. Johnson largely focuses his energy on marijuana, but also suggests that concern over narcotics such as heroin are exaggerated compared to the impact of alcohol or even smoking cigarettes. He is a regular marijuana user, noting that he most recently took an edible form of the drug three weeks ago.

“I’m one of the 100 million Americans that do this. If that disqualifies me from being president, so be it,” he told The Associated Press, adding that he recently purchased the drug legally in Colorado but illegally transported it back to his home in New Mexico. “Sure, I’m in the tens of thousands of those that are guilty of that phenomenon,” he says.

He promises not consume marijuana if elected president, however. “I think the American people deserve to know that there will be a steady hand,” he said. “And I would hope that my history regarding this stuff would bear out the fact that I’m a pretty disciplined cat.”

Left out of this story is the fact that Johnson was not so long ago, as reported here, the CEO of Cannabis Sativa Inc.   And, as the title of this post is meant to suggest, that history creates a notable connection between Prez Candidate Johnson and our Founders.  Specifically, although there is much debate over whether and how the Framers of our Constitution used cannabis, I am pretty sure it is widely acknowledged that both George Washington and Thomas Jefferson grew hemp for sale on their Virginia farms.  Thus, like Johnson, they were both involved in cannabis commerce.