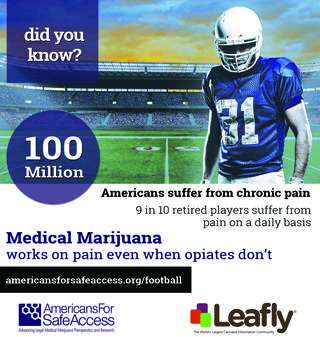 Regular readers of this blog likely know that I think pro football players could (and perhaps will) be hugely important social force in charging national perceptions concerning marijuana as a legitimate medicine for dealing with pain. Consequently, I find both notable and significnat this recent New York Times piece headined "Raven Calls on N.F.L. to Allow Marijuana Use for Sport’s Pains." Here are excerpts:

Eugene Monroe has had his share of bumps and bruises during his seven­year N.F.L. career as an offensive tackle with the Jacksonville Jaguars and the Baltimore Ravens.  He has had shoulder injuries, ankle sprains, concussions and all the usual wear and tear that comes from hitting defenders dozens of times a game.

To deal with these injuries, Monroe has stepped forward and called upon the N.F.L. to stop testing players for marijuana so he and other players can take the medical version of the drug to treat their chronic pain, and avoid the addictive opioids that teams regularly dispense.   “We now know that these drugs are not as safe as doctors thought, causing higher rates of addiction, causing death all around our country,” Monroe said in an interview on Friday, “and we have cannabis, which is far healthier, far less addictive and, quite frankly, can be better in managing pain.”

Retired football players like Kyle Turley and Ricky Williams have promoted the benefits of marijuana and called for the league to acknowledge those benefits. Monroe, though, may be one of the first to openly urge the league to stop testing for the drug, possibly risking the wrath of owners, league officials and other players.

In a series of posts on Twitter in March, Monroe castigated Commissioner Roger Goodell for refusing to modify the league’s stance on the drug.  Monroe also donated $10,000 to help pay for research on the benefits of medical marijuana, and he challenged other players to match his gift.  “It’s a shame that Roger Goodell would tell our fans there’s no medical vs recreational distinction,” Monroe wrote.

Last week, Monroe said he had given $80,000 to Realm of Caring, a Colorado-­based advocacy group that is working with the Johns Hopkins University School of Medicine to study the impact of medical marijuana on traumatic brain injury and chronic traumatic encephalopathy, a degenerative brain disease linked to repeated hits to the head. Monroe also started a website about the use of marijuana for pain management.

Though two dozen states now allow the use of some forms of marijuana, the N.F.L. has not softened its stance on the drug.  Before the Super Bowl in February, Goodell said the league’s medical advisers continued to look at the research but did not have enough evidence to warrant a change in the league’s position. “Yes, I agree there have been changes, but not significant enough changes that our medical personnel have changed their view,” Goodell said. “Until they do, then I don’t expect that we will change our view.”

Even if the N.F.L. changed its position, any changes to the league’s policy on banned substances would have to be negotiated with the N.F.L. Players Association.  Monroe said that he had met with the association’s executive director, DeMaurice Smith, and that talks were continuing....

Monroe said that players had told him that they supported his call to soften the league’s stance on marijuana testing, but no current player has publicly backed him. The Ravens’ owner, Steve Bisciotti, tacitly supported Monroe. “We’re not the ones taking that physical abuse,” Bisciotti told balitmoreravens.com. “We’re not talking about a kid that’s been suspended three times coming out and saying that. I respect Eugene a lot, and I think all he asked for is more studying on the subject.”...

Monroe said he was not afraid of any retribution for his stance in part because he said he did not use marijuana. But from the research he has done, Monroe said the benefits were strong enough to justify pushing the league and the union to relax its position, even if it hurt his standing in the N.F.L. “My health is far more important than any possible career implications,” Monroe said. “I want to be there for my family.”