"These nuns will get you high — as heaven" 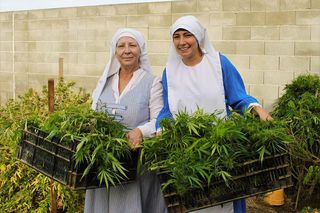 The title of this post is the headline of this notable new New York Daily News article, which discussses the interesting work of the Sisters of the Valley in Merced, California, and the impact that new state laws on medical marijuana could have. Here are the basic details:

Holy smokes — these nuns are really working for a higher power! The Sisters of the Valley in Merced, Calif., grow medicinal marijuana in their garage for various pot-laced health products.

While Sisters Kate and Darcy don traditional habits, they are not Catholic. But they still consider themselves nuns with a calling to heal the sick — with pot. “We spend no time on bended knee, but when we make our medicine it’s a prayerful environment. It’s a prayerful time,” Kate told KFSN-TV.

While medicinal pot is legal in California, bills signed into law this past fall allow local governments to restrict or ban marijuana growing and dispensing. Pot advocates hope local jurisdictions will want to partake of tax revenue. But some municipalities — such as Merced, a conservative town in agricultural Central California — have enacted bans on pot production.

So this sisterhood might need to find a new place by March 1, when the new state and local laws take effect. Kate and Darcy said their products include cannabidiol but only traces of tetrahydrocannabinol, the chemical that provides pot’s high.

When I discussed this story with a very smart colleague, she suggested that consumers of the marijuana products produced by Sisters of the Valley might find it especially difficult to kick the habit. Jokes aside, one of the common consequences of having more big government regulation of medical marijuana is the tendency, as suggested in this story, to make it even hard for small producers to stay in business. Apparently, this can be true even if you have a holy partnership.