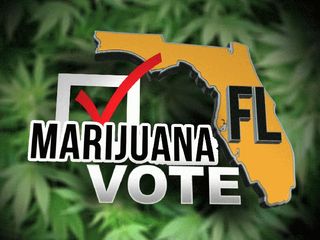 As reported in this new AP article, a "proposed constitutional amendment to allow medical use of marijuana will be back on the ballot in November, and organizers said Wednesday that growing public support and a larger voter turnout in a presidential election year should help pass the measure that narrowly failed in 2014."  Here is more:

The group organizing a petition drive to put the issue on the ballot now has 692,981 certified voter signatures, nearly 10,000 more than it needed to put the proposed amendment on the ballot.  “We feel very good that 60 percent plus of Florida voters will finally approve a true medical marijuana law,” said Ben Pollara, who is organizing the effort for United for Care.

The state requires that constitutional amendments receive at least 60 percent approval from voters.  In 2014, 57.6 percent of voters supported a medical marijuana initiative.  Pollara said at the time that supporters hoped lawmakers would recognize that most Floridians wanted to legalize medical marijuana and pass a bill to approve it.

But the Legislature has been tepid on the issue. In 2014, lawmakers did approve the use of non-euphoric marijuana to treat seizures.  But the product is still not available to those who need it because the state has had problems establishing regulations overseeing its production and distribution. “We got nowhere, so here we are back on the ballot,” Pollara said.  “Current law has helped no one.”

Personal injury lawyer John Morgan has spent more than $6 million between the 2014 and 2016 efforts to legalize medical marijuana.  He says his brother, a quadriplegic who uses marijuana to control muscle spasms, is one of his inspirations behind the campaign. In an email to supporters Wednesday night, Morgan said, “We’re back.  We’re going to win for the patients. BELIEVE!!!”...

Pollara noted that millions of dollars were spent opposing the 2014 initiative and it still received nearly 58 percent support. As more people approve of the idea of medical marijuana and with more voters expected to turn out this year, he said he’s confident it will pass despite any campaigns mounted against it.  “One thing that we learned is that we don’t have to respond to everything they say; we don’t have to match them dollar for dollar. We just have to get out the message that marijuana helps people who are sick and suffering,” he said.

As was true in 2014, it will be interesting to watch how a medical marijuana campaign in Florida, and this time around we will have the added excitement of presidential candidates being asked to weigh in whenever they campaign in this significant southern swing state.