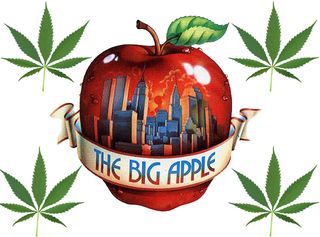 The New York Post has this notable new piece on marijuana enforcement patterns in the Big Apple.  The piece is headlined "Marijuana arrests drop 40% this year as NYPD mellows out," and here are excerpts:

Cops are following through on Mayor de Blasio’s pledge to stop locking people up for carrying small amounts of pot. Police cuffed 18,120 stoners through Oct. 20 — a 40 percent plummet from the 29,906 pot busts in the same period last year, state Division of Criminal Justice records show.

At the same time, tickets for pot violations have surged. Cops handed out 13,081 low-level pot summonses through the end of September — and are on pace for more than 16,000 tickets. The NYPD issued 13,378 pot tickets for all of last year, and 13,316 tickets in 2013, records show. City Hall ordered cops last year to ticket suspects they caught with 25 grams or less of marijuana instead of arresting them after district attorneys and activists clamored for drug decriminalization.

I find this basic data quite interesting, and I am hopeful there will soon be some serious resesrch done in conjunction with what this data reveal and suggest. For example, I would be interested in learning more about related economic realities, e.g., is the city as a whole and/or certain precincts starting to raise (considerably?) more revenue from issuing more tickets instead of making more arrests? And, of course, the relationships between these charing marijuana arrest rates and broader crime patterns could be fascinating if there were any notable correlations between the two. Finally, especially in light of historical patterns of disparate arrest rates for marijuana offenses for different races, I wonder if there are notable new racial dynamics in these notable new data.