"If Mexico legalizes marijuana, what will the U.S. do?" 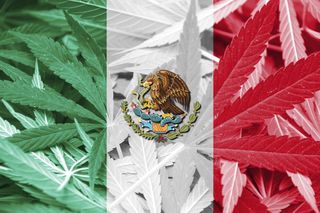 The title of this post is the headline of this notable and interesting op-ed in the Los Angeles Times authored by Jorge Castañeda, who once served as foreign minister of Mexicoand now teaches at New York University. Here are excerpts:

Mexico may soon enter an elite club composed of Holland, Portugal, Uruguay and Colorado, Oregon and Washington state: It's on the verge of excluding marijuana from the destructive war on drugs. But will the United States stand in its way?

On Nov. 4, Mexico's Supreme Court voted by a wide margin to declare unconstitutional the country's ban on the production, possession and recreational consumption of marijuana. A group of citizens had banded together in a so-called cannabis club (named SMART, for the initials in Spanish of its full title) and requested permission to grow and exchange marijuana among themselves; the government's health agency (the equivalent of the U.S. Food and Drug Administration) denied them permission; the group sought a writ of habeas corpus, and went all the way to the Supreme Court, which granted them the writ and ordered the agency to legalize the club and allow it to function.

This decision does not entail an across-the-board decriminalization of recreational marijuana. For the moment, it applies only to the group that sought permission. But the court's ruling may eventually extend to everyone seeking to grow or consume the drug.

Absent injury to third parties, the court resolved that, under the constitution, every individual has the right to enjoy life as he or she sees fit, and that secondary legislation — like prohibiting marijuana — cannot curtail that right. The court also ruled that although marijuana may cause some degree of harm to some adult users in large quantities, prohibition is an excessive antidote to that harm....

Unlike in the U.S., public opinion in Mexico is against legalizing pot, which is why SMART chose the judicial road instead of pursuing a legislative approach. Recent history has shown that once the courts resolve controversial social issues — abortion, same-sex marriage, living wills — public opinion shifts and eventually comes around to the more progressive view.

The ruling means a great deal for Mexico. Domestically, it probably spells the beginning of the end of its bloody, costly, fruitless war of choice on marijuana. It will be increasingly awkward for the country's armed forces and police to prosecute growers, wholesale traffickers and retail dealers of a substance that can be grown and consumed legally, if not yet bought and sold freely.

The decision will not immediately affect the country's cartels, or the rising (once again) levels of drug-related violence and corruption. It will, however, eventually bring down marijuana prices, which over time will damage the cartels' business. And if President Enrique Peña Nieto wishes to continue the drug war, the decision will free him to concentrate on heroin and methamphetamines (produced in Mexico) and cocaine (brought from South America).

For the country's always prickly ties with Washington, Mexico's Supreme Court ruling could cut either way. If hard-liners in the U.S. — the Drug Enforcement Administration and its supporters in Congress — determine the American response, there will be trouble.... Or, if President Obama as well as the moderates in the State and Justice departments run the show, the decision could serve as a much-needed excuse to rethink prohibition.

Both the U.S. and Mexico would then have no choice but to search for alternative solutions, and leave behind the punitive, security-based approach Washington has imposed on the world since the early 1970s.