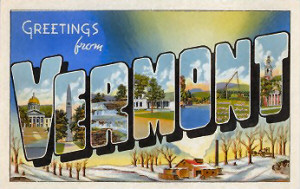 I have long thought advocates for marijuana reform could and should focus on the economic development benefits that seem to flow from permitting a legal market in cannabis.  I now see from this local article in Vermont, headlined "Marijuana pitched for young VT entrepreneurs," that some folks in the Green Mountain State are making a pitch in this way. Here is how the article gets started:

Entrepreneurs are pitching marijuana as a cash crop that would keep college graduates in Vermont and create thousands of jobs. The Vermont Cannabis Collaborative says in a new report that if Vermont lawmakers bring “order to the chaos” of the underground illegal marijuana market, business opportunities would abound.

Newman spoke during a news conference in Burlington one day after legalization opponents rallied at the Statehouse in Montpelier. Newman and other members of the Vermont Cannabis Collaborative group have been working for months on recommendations for a legal marijuana industry in the state.

The resulting report, titled “What Cannabis Can Do for Vermont,” suggests that any large-scale marijuana-growing operation should be at least 51 percent owned by Vermonters and certified as a benefit corporation, meaning the business would consider social and environmental values in addition to profit. The proposed Vermont marijuana economy also would include home growers with six or fewer plants, and artisanal craft growers with seven to 99 plants.

The idea is to create a market unlike the kind that Ohio voters recently rejected, which would have allowed just 10 commercial growers. “We think we have a chance here to grow an economy based on Vermont values, based on Vermont tradition, and one that embraces the already-existing infrastructure that can really help keep young people here and make Vermont an attractive place to live,” said Bill Lofy, former chief of staff for Gov. Peter Shumlin.

Lofy’s former boss is publicly coy on whether he will push a legalization bill during his final year as governor. Shumlin, a Democrat, favors legalization and last year accepted thousands of dollars of campaign contributions from the groups that are calling for legalization, but he has hesitated to set a date.

The governor promised this week to make up his mind by January. “I gotta be candid with you,” Shumlin said Monday. “I’m focusing on a lot of other things, like the budget, creating jobs. We will get to that, but I haven’t made a decision.”

Creating jobs is among the goals of the Vermont Cannabis Collaborative, which argues that legalization would create as many as 4,000 positions, because the industry would need growers, architects, lawyers, marketing experts, security experts and more. The group used a custom economic model to estimate the total market at about $250 million, assuming 50,000 pounds of marijuana would be consumed annually.

The Vermont Cannabis Collaborative has a lot of reform resources collected at this web page, and its recent report, titled "What Cannabis can do for Vermont: How to grow a thriving, community-based, legal cannabis economy," is available at this link.