Should next week's GOP debate start with a question about marijuana reform and economic development? 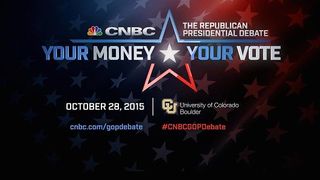 The question in the title of this post is prompted by this new CBNC article headlined "GOP candidates divided on marijuana." The actual article does not really cover any new ground, but its source is especially notable because CNBC is the host of the next big GOP debate on Wednesday night. Accourding to the article, the CNBC debate on Wednesday, Oct. 28 is being titled "Your Money, Your Vote: The Republican Presidential Debate" and it will "feature two sets of candidates discussing critical issues facing America today, including job growth, taxes and the health of our economy." Moreover, as noted in this prior post, the debate is taking place in Colorado, a state which has experienced notable changes in job growth and taxes as a result of state-level marijuana reform.

In addition to being well-suited for the main topics and setting for next week's GOP debate, marijuana reform issues and related politics are especially timely. Just earlier this week, the Liberal Party in Canada won a huge national election while running on a platform advocating full marijuana legalization.  And just six days after the debate, the swing state of Ohio will have voters deciding whether to become the first state east of the Mississippi to vote on a full marijuana legalization initiative.

At the very least, I would love to see candidate John Kasich, the current Governor of Ohio, asked next week about whether he would acknowledge the potential for marijuana reform in Ohio to enhance job growth and tax revenues while reducing government expenditures on failed big-government, freedom-restricting policies.  In addition, I would love for New Jersey Gov Chris Christie, who has pledged to "enforce the federal law" aggressively even in states that have legalized marijuana, exactly how he would try to prevent Ohio officials from moving ahead with state reforms if voters enact such reforms in the Ohio constitution next month.