"Is it time to legalize marijuana in sports?" 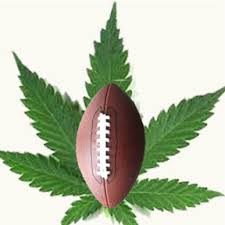 The question in the title of this post is the headline of this very lengthy San Diego Union-Tribune article spotlighting the arguments being made by a former NFL players about the relative advantages of marijuana as a means of pain relief.   Here are excerpts:

Kyle Turley's decade-long NFL career left the former San Diego State All-American offensive tackle with a multitude of health issues. Turley’s football injuries broke his body, but he’s also convinced that football did irreparable damage to his brain. He’s struggled with anxiety, headaches, depression and rage issues. In an interview with the Union-Tribune in 2013, he even admitted to having entertained suicide.

To help him deal with his ailments, Turley’s doctors have prescribed a multitude of painkillers, psych meds and muscle relaxants over the years. Depakote. Wellbutrin. Zoloft. Flexeril. Percocet. Vicodin. Toradol. Vioxx.

You don’t need to know what each of these drugs is designed to do. The point is that dating back to when he blew out his knee at SDSU in 1996, Turley has been on them all at some point, often in different prescribed combinations, over a period that spans almost 20 years.

That ended in February when Turley decided to free himself of all prescription medications and use only marijuana – a move he credits with saving his life.

The sports world appears to be waiting to see what happens politically in regard to marijuana, with the movement to legalize it gaining steam in the United States. 23 states have now legalized marijuana in some form, with four of those (Alaska, Washington, Oregon and Colorado) allowing for outright recreational use for adults aged 21 and older.

The drug is still illegal in all the major pro sports leagues and very restricted at the NCAA level. In the meantime, there’s a growing segment of athletes who believe the health benefits to be gained from the marijuana plant outweigh the risks – especially when compared to the opioids they’ve long been prescribed.

Experts in the field of pain medicine agree that everything is coming to a head. “We have 100 million Americans in chronic pain. We don’t have good, strong and safe therapies. We have a crisis with pain and opioids in this country,” said Dr. Lynn Webster, a past president of the American Academy of Pain Medicine. “We need to find better treatments for athletes and non-athletes, and cannabinoids may by one way.”...

A 1997 New York Times story estimated that “60 to 70 percent” of NBA players smoked marijuana, though this pre-dated the medicinal marijuana wave of the 2000s, and it appears that marijuana was used mostly as a recreational drug.

Around the turn of the decade, evidence suggests more athletes started using marijuana more to help manage pain from injuries, especially in the NFL. Running back Jamal Anderson, who played for the Atlanta Falcons from 1994 to 2001 recently told Bleacher Report that during his career about “40 to 50 percent of the league” used marijuana. San Diegan Ricky Williams, who played for the Saints, Dolphins and Ravens from 1999 to 2011, has also publicly talked about using marijuana during his career to help control pain and stress.

The focus on the issue sharpens when you consider that the NFL currently faces a lawsuit filed in May by a group of former players who allege that all 32 teams liberally dispensed large quantities of painkillers to injured players in a “conspiracy” to keep them on the field without fully educating them on the risks these medications present.

Anderson, Williams, Turley and former Denver Broncos tight end Nate Jackson are now part of a growing number of former players who believe that marijuana is a safer way to help athletes deal with pain. “It’s natural for football players to lean toward marijuana to deal with the violence and trauma of the game,” said Jackson, 36, who played for the Broncos from 2003-08, and who estimates that up to half his team might have used marijuana. “Teams will prescribe you bottles and injections that are really bad for you. Cannabis was what my teammates and I preferred.

“It was a supplement/recovery for me. (Opioids or marijuana), it was never a dilemma. It was a physical reaction to substances that I assessed after trying both and realizing that marijuana was better for my mind and body. I don’t like taking pills. They make me feel slow, sluggish and heavy.”...

The NFL only tests for marijuana between April and August, so it’s not difficult for players who use cannabis to work around that and stay under the radar while ensuring they pass the drug screening. Turley also used marijuana regularly when he played in the NFL because he said it helped him deal with some of his health issues – anxiety, sleeplessness and depression among them. Now, he’s returned to marijuana as a way to manage his ailments in his post-NFL life.

With California’s liberal medical marijuana policies, access to marijuana was one of the reasons Turley uprooted his family from Nashville, Tenn. back to his hometown of Riverside last April. Since weaning himself off all prescription drugs three months ago and transitioning solely to medicinal marijuana, Turley has noticed a “night and day difference in his psyche.” He no longer suffers from low testosterone, his libido is back, and his anxiety issues have improved.

“I don’t have as bad depression any more, that’s getting better. The cognitive impairment seems to be getting a little bit better. Life is more manageable, I have more energy and feel more alive,” Turley said. “I don’t think about killing myself any more. Suicidal thoughts and tendencies were part of my daily living. At the end of the day, I was losing hope with the synthetic drugs and now I feel better. It’s giving me hope again, helping with depression and anxiety.”

Some athletes also tout marijuana for its value as a neuro-protectant though scientific studies on the subject are still very preliminary. Some studies of the drug have found just the opposite – that it can actually lead to suicidal thoughts in some users. Like many medical issues, the anecdotes from true believers is increasingly at odds with the clinical evidence, stoking emotions on both sides.

More research could prove valuable for athletes looking for answers outside established medical practices that they have come to distrust – especially NFL players who have in the last five years become much more aware of how concussions and head trauma sustained during their football careers can cause long term brain damage or chronic traumatic encephalopathy (CTE) – the progressive, degenerative brain disease that results from multiple sub-concussive blows to the head.

Turley has been diagnosed with early onset dementia, and has had his brain scanned for damage. Scans yielded a “big blurred area that doctors are concerned about,” Turley said. Put together the results of the scans, his memory issues, depression and anxiety problems, and Turley believes he has CTE. Turley also thinks marijuana might be helping his brain to heal. “I believe that the answer lies in marijuana and I’m on that search to figure that out. … With marijuana I saw some pretty amazing things and how it can deal with brain injury and this disease I have,” Turley said. “From memory to function, there are some wonders in this medicine.

Yet, for all his praises of marijuana, even Turley admits that in terms of its properties as a medicine, it’s still very much an untested commodity. While he has no medical or scientific credentials, he is passionate about the subject and is anxious to learn more. “There’s no real science behind this yet,” Turley said. “I’m really looking forward to expanding on my experience with it now that it’s giving me relief.