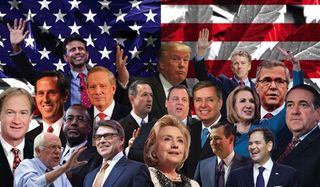 The title of this post is the headline of this notable new article appearing in a special edition of Newsweek titled "Weed 2.0." Here is how it gets started:

In the past few years, the U.S. has been steadily growing support for marijuana reform. From the presidential candidates to the general public, this progressive attitude has become a hot topic for debate, and as an election year approaches, everyone—from governors to legislators to those who would be president—seems to have an opinion on the issue.

Though public opinion is shifting toward embracing cannabis reform, presidential candidates are a little more hesitant to jump on the bandwagon. Of the candidates who have expressed interest in running for the 2016 presidential nomination, only three support radical federal reform as of press time. One candidate is Vermont Senator Bernie Sanders, who is in favor of decriminalization and medical marijuana use and open to federal legalization. Alongside him is Democratic candidate Lincoln Chafee. Having already signed marijuana decriminalization laws on a state level, the former Rhode Island governor admits recreational use could be good for tax revenues. Still, both Chafee and Sanders have made it clear they will continue to monitor Colorado before making any major decisions. Finally, Donald Trump expressed interest in legalizing drugs back in 2011 but as of press time has not released further statements on the matter.

A handful of candidates are open to medical marijuana legislation but are against recreational use. Once a staunch opponent of cannabis reform, Hillary Clinton has since become more receptive—a change from her 2007 stance against decriminalization. Now, the former secretary of state and perceived Democratic front-runner believes state governments have the right to set their own laws and is open to medical marijuana use. All the same, she maintains she has never tried cannabis herself. “I didn’t do it when I was young; I’m not going to start now,” she told CNN. Like Clinton, Democratic candidate Martin O’Malley has softened over the years. Previously known for his firm opposition to drugs, the Maryland governor has since become open to moderate marijuana reforms, such as decriminalization and a program for very limited medical marijuana distribution.

Most of the current Republican candidates are against legalization—but where some believe in the individual state’s prerogative to decide its own legislation, others believe the federal government has the final word, pitting a classic conservative issue, states’ rights, against the decidedly un-Republican idea of federal dictation.

Though Rick Perry has expressed clear resistance to federal legalization, he is a strong proponent of individual state rights. In an interview with talk radio host Hugh Hewitt, Perry said, “I don’t agree with those decisions that were made by the state of Colorado or Washington, but I will defend it to my death, if you will, to allow them to make those decisions.”

Fellow candidates Ted Cruz and George Pataki echo this approach. Like Perry, they strongly oppose marijuana legalization but agree that states are entitled to make their own decisions. Despite the traditional Republican trend toward this kind of states’ rights rhetoric, Cruz has been critical of Obama’s leniency in allowing states to dictate their own cannabis laws, and Pataki is wary of the ramifications of individual state legislation with respect to neighboring states and youth. Both candidates admit to having tried cannabis when they were younger.

During his time as Florida governor, Jeb Bush spoke against a medical marijuana bill—but nonetheless supported the state’s right to decide the issue itself. He, too, admits to having smoked cannabis when he was younger.

Marco Rubio, Chris Christie and Carly Fiorina oppose legalization, medical use and decriminalization. Though Rubio has declined to comment on his own history with weed, Fiorina claims she never had any interest in marijuana, even when she was battling cancer. Christie was opposed to the medical legislation in his state.

Perhaps some of the strongest opponents of marijuana reform among those running are Mike Huckabee and Rick Santorum, both of whom oppose marijuana reform on a federal level. Unlike their fellow GOP candidates, Huckabee and Santorum do not believe the states have the right to make their own laws. In a statement he posted on Facebook, Huckabee wrote that Colorado’s tax revenues came at a severe social cost. Meanwhile, Santorum believes the states that have legalized marijuana use are in violation of federal law. As he explained in an interview with Hugh Hewitt, “I think federal laws should be enforced, and I think Colorado is violating the federal law.... The federal law is there for a reason, and the states shouldn’t have the option to violate federal law. As Abraham Lincoln said, you know, states don’t have the right to wrong.”