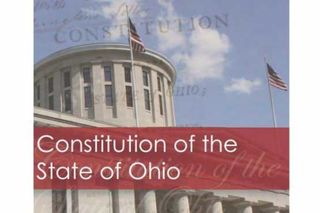 Regular readers know that I have been flagging Ohio as a state to watch closely in for the distinctive and dynamic marijuana reform discussions and debates taking place in the Buckeye State.   This new report from Time with the latest news on the latest developments highlights why I now have a front-row seat for watching novel issues unfold in the months ahead.   The headline of the piece is "Ohio Legislature Strikes Back Against Marijuana Legalization Bid," and here are excerpts:

A campaign to legalize marijuana in Ohio took a step closer to making November’s ballot Tuesday, after its promoters turned in more than twice the required number of signatures.

But the measure will face competition at the polls.  Ohio legislators also approved their own ballot measure on Tuesday to undermine the pot plan, which lawmakers worried would amount to a “marijuana monopoly” because of its provision that only 10 growers would control the wholesale pot market.  The lawmakers’ measure would block other measures that benefit select economic interest groups.

As detailed by the Center for Public Integrity, the campaign’s director, Democratic activist Ian James, came up with the idea and is planning to pay his own firm $5.6 million to push the ballot initiative.

Ohio Rep. Mike Curtin, a Democrat, said he sponsored the anti-monopoly measure because he opposes the way Responsible Ohio is using the citizen-initiated constitutional amendment, not because he opposes pot legalization.  “Are we going to allow a small group of investors, who have literally no background in drug policy… to carve themselves a special niche in our state’s founding document?” he said.  “To me it’s galling. It’s nauseating.”

But James said voters should have the right to decide the issue.  “Some statehouse politicians believe the voters are smart enough to elect them, but they aren’t smart enough to decide ballot issues like marijuana legalization,” he said in an earlier statement....

If voters approve both of the conflicting measures, Ohio law says whichever gets the most votes would win.  But Secretary of State Jon Husted, a Republican, recently said that if both passed, the legislatively referred anti-monopoly measure would block Responsible Ohio’s plan because citizen-initiated measures take 30 days to go into effect.

The issue could end up before a judge.  If both pass, “we have a very interesting court fight on our hands,” Curtin said.