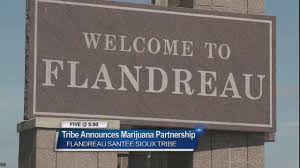 The title of this post is the headline of this extended new article from the Sioux Falls Argus Leader concerning notable marijuana developments in South Dakota. Here are excerpts:

Five months from now, according to the plan, Indians and non-Indians alike will be smoking marijuana on tribal lands in Flandreau.

The U.S. Justice Department told Indian tribes last December that they can grow and sell marijuana as long as they follow the same federal conditions laid out for Washington, Colorado and other states that have legalized the drug.  For the tribe and Colorado-based Monarch America, hired to design, construct and develop a grow facility on the Flandreau reservation, that has opened the door to a potentially rich new business enterprise — just as the advent of casino gambling did decades ago.

They intend to open by the first week of December, says Monarch America CEO Eric Hagen, who adds, with a smile, "Everyone will have a merry Christmas."

South Dakota Attorney General Marty Jackley isn't as confident of that. While he insists he's having positive talks with Flandreau officials about his concerns as they move forward on their project, Jackley says the future of marijuana on the reservation isn't so black and white. He called the Justice Department's Cole Memorandum — authored in August 2013 by Deputy Attorney General James Cole to address the legalization of marijuana in states like Washington and Colorado — a complex directive that has created confusion on the tribal front.

While Hagen believes that memorandum allows tribal marijuana ventures in any state, Jackley questions whether it was meant to apply only to tribes in states that have legalized marijuana. South Dakota isn't one of those states. That said, he believes anyone with marijuana in their bloodstream or in their physical possession is in violation of state and federal law, including non-Indians on tribal lands and Indians who go off reservation.

"I want to encourage tribal leaders to continue to work with state authorities to better ensure ... that both Indian and non-Indian persons are not put in harm's way by the jurisdiction complexities being created by our federal government," he said.

That's not Hagen's perspective. The feds have said they aren't going to prosecute the growing or selling of marijuana by state or tribal jurisdictions that have legalized it as long as they are doing a strong job of regulating that growth and distribution and addressing infractions, he said.

Hagen insists Flandreau will have stricter regulations than any state with legal marijuana cultivation and consumption statutes on the books now. And because of that, "I think people just need to know that when they come on to tribal lands to partake ... that it's a safe haven for them whether you're a tribal member or not," he said. While he believes anybody in South Dakota with marijuana in their system or in their possession could be arrested, Jackley doesn't envision a situation where law enforcement will simply camp out and wait to arrest people coming out of a tribal lounge.

One of the other big concerns for the Flandreau tribe will be keeping track of its marijuana. Law enforcement in Flandreau say they worry about where the tribal marijuana might end up. Hagen said that shouldn't be an issue, not with the "radio frequency identification (RFID) inventory and tracking system" his company is helping the tribe put in to follow marijuana "from seed to sale, ensuring products do not leave designated areas."

"I personally don't believe it will remain in the building," Flandreau Police Chief Anthony Schrad said. "You can purchase the marijuana in the lounge, but it seems to me it would be very easy to remove the RFID tag from the container you purchase it in, transfer the marijuana to your own personal vial and leave with it."