"Recent pot legalization ... has galvanized some to mix weed and sex to make some money." 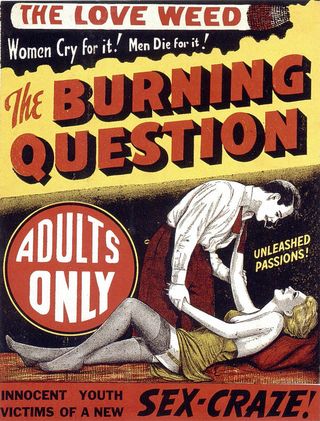 The title of this post is from a sentence in this notable new OZY article, which is headlined "Getting Stoned, Getting Freaky." Here are some (amusing? prurient? silly?) excerpts:

[G]etting intimate while getting high is not exactly a 21st-century invention. Cannabis was used for a range of medicinal purposes more than 10 centuries ago in ancient India, including — you guessed it — as a turn-on trigger.  There are at least 18 variations of bhang, a grass-infused drink that was used as a sort of love potion in the ancient Ayurvedic and Unani Tibbi systems of medicine, according to the United Nations Office on Drugs and Crime.  Some experts, like anthropologist Christian Rätsch in his book Plants of Love: The History of Aphrodisiacs and a Guide to Their Identification and Use, argue that weed was a central component to the sexual part of ancient Hindu and Buddhist Tantra, though it’s still up for debate how prominently it was featured.

And modern science hasn’t exactly cleared the haze when it comes to pot’s effect on sex. A flurry of studies in the 1980s found mixed results, with some noting that bud put a serious damper on sex while others found it lit a fire under the bed, according to Michael Castleman, a journalist who specializes in sexuality.  Research into the weed/sex tie-up went on hiatus until about a decade ago, when Canadian researchers picked up the torch and found that one-third of interviewees used weed specifically for its sex-enhancing properties, while another third said it “seldom” or “never” improved sex.  “It doesn’t work the same way for everybody,” warns Andrew Hathaway, one of the study’s authors and an associate professor of sociology at the University of Guelph.

Today, weed can seem like one person’s magical cup of tea and not another’s because it’s not an objective aphrodisiac per se, says Dr. Lester Grinspoon, professor emeritus of psychiatry at Harvard Medical School and one of the most widely known marijuana researchers.  Marijuana doesn’t increase libido or sexual performance so much as it enhances the sensations of sex. Just like how food tastes better and music sounds better while stoned, Grinspoon says, “sex feels better.”  When he first started smoking in his 40s, it took Grinspoon a few tries to feel anything.  It finally struck him that he was high when he got into bed, he says. But nowadays getting stoned is a bit different given how much stronger the drug is.  Smoking too much can make someone fold in on themselves or become paranoid, which isn’t exactly the sexiest move.

Science be damned, weed-centric entrepreneurs are seemingly willing to try anything to make money in an industry that many are calling the Wild West.  Recent pot legalization in a number of U.S. states — the big vote in California happens during next year’s election — has galvanized some to mix weed and sex to make some money. There’s Foria, a well-received marijuana-infused sex lube for women, and more products are likely to follow.  Even some porn stars are cashing in by partnering with growers and having smoke sessions on live cams with fans, says Chauntelle Tibbals, a sociologist who has done extensive research on the adult entertainment industry.  Hell, there’s even an ad for a sex columnist “with weed focus.”

There’s obviously a lot more at stake here than making money.  Pro-weed activists promote weed as an immaculate aphrodisiac that can help deter date rape, since alcohol tends to lead to aggression while pot tends to have the opposite effect.  But critics warn the drug’s strength will lead to unsafe sex.  The reality, says Tyler Osterhaus, an anti-violence educator who has worked for the Colorado Department of Public Health and Environment’s Sexual Violence Prevention Program, is somewhere in the middle.  He adds, however, that weed can certainly lower someone’s guard and make them vulnerable to sexual violence.

Good sex is one of the things Carl Sagan mentioned in an essay about the benefits he got from smoking marijuana; he also thought it stimulated his creative thinking. The essay was published anonymously in Dr. Grinspoon’s 1971 book “Marihuana Reconsidered”, and Dr. Sagan was recognized as the author after his death. He and Dr. Grinspoon became good friends, and I believe they shared a few joints over the years.