Just what is Donald Trump's position now on modern marijuana reforms (and the modern drug war)? 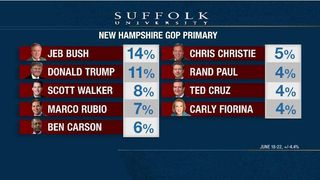 It is justifiably hard for me and others to take too seriously Donald Trump's bid for the GOP presidential nomination.  Nevertheless, given that some polls indicate some GOP voters are taking "The Donald" seriously and especially given Trump's ability to get more media attention than most other GOP candidates, I think it may be time for serious marijuana reformers to seriously explore candidate Trump's current positions and perspectives on marijuana reform in particular and the broader drug war more generally.   Perhaps unsurprisingly, a quick Google search reveals that The Donald has through the years had talked about, but not always talked consistently about, drug policies.

As noted in this recent MSNBC piece, way back in 1990 "a thick-haired Donald Trump was telling a crowd in South Florida that 'We’re losing badly the war on drugs. You have to legalize drugs to win that war. You have to take the profit away from these drug czars'."   In a similar vein, this unofficial 2012 review of the views of possible Prez candidates sets forth this account of the "Trump position on Marijuana":

• He would legalize it and tax it.

• He thinks that legalization would save a lot of money in our prisons and courts and profit the states.

However, before would-be marijuana reformers get too revved up considering cannabis capitalism under a President Trump Administration, this recent report on comments by Trump at the 2015 CPAC conference suggests that, as I have highlighted below, The Donald's marijuana reform views may still be evolving:

Trump said he has several agenda items should he become president, and his top item is to destroy the Islamic State.... In a lightning round with [Sean] Hannity, Trump also said that he is pro-life, with the exceptions of cases involving the life of the mother, rape, or incest; against legalized marijuana, unless it's medical marijuana, which he supports; and he believes Hillary Clinton botched Benghazi, her husband is a "nice guy" with a lot of problems coming up; and Obama is "an incompetent president."

To the extent Donald Trump could and and will be taken seriously as a GOP presidential candidate, I think we can and should expect him to generally be a voice for more pro-business, free-market domestic policies. Consequently, it will be interesting to watch if and when he is pressed on both his past and current positions on removing government restrictions on marijuana businesses and on recent failed drug war government efforts to eradicate illegal drug markets.

Trump stop the drug war, abolish d.e.a. and legalize marijuana. Any other veiw or policy is evil and destroying Americans.

I don't think Trump will come out right now and say "its time to end the DEA". Trump understands where the money is going! If Trump is for the peoples vote, then he should respect the fact that we the people demand an end to the failed drug war, that is costing billions and killing Americans. The war on drugs essentially is the war on freedom.