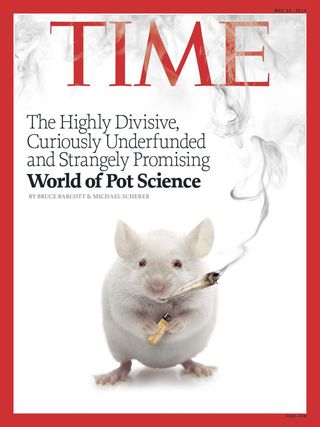 I am very pleased to see that the new issue of Time magazine has a cover with an amusing picture and this text: "The Highly Divisive, Curiously Underfunded and Strangely Promising World of Pot Science."  I have long thought that one of the biggest problems with federal marijuana prohibition has been its significant anti-science impact, and the subheading of this Time cover story highlights this theme: "Legalization keeps rolling ahead.  But because of years of government roadblocks on research, we don’t know nearly enough about the dangers of marijuana — or the benefits."  Here are excerpts from a must-read article:

Welcome to the encouraging, troubling and strangely divided frontier of marijuana science.  The most common illicit drug on the planet and one of the fastest-growing industries in America, pot remains – surprisingly – something of a medical mystery, thanks in part to decades of obstruction and misinformation by the federal government.  Potentially groundbreaking studies on the drug’s healing powers are being done to find treatments for conditions like epilepsy, posttraumatic stress disorder (PTSD), Alzheimer’s disease, Parkinson’s disease, sickle-cell disease and multiple sclerosis.  But there are also new discoveries about the drug’s impact on recreational users.

The effects are generally less severe than those of tobacco and alcohol, which together cause more than 560,000 American deaths annually.  Unlike booze, marijuana isn’t a neurotoxin, and unlike cigarettes, it has an uncertain connection to lung cancer.  Unlike heroin, pot brings almost no risk of sudden death without a secondary factor like a car crash.  But science has also found clear indications that in addition to short-term effects on cognition, pot can change developing brains, possibly affecting mental abilities and dispositions, especially for certain populations.  The same drug that seems relatively harmless in moderation for adults appears to be risky for people under age 21, whose brains are still developing.  “It has a whole host of effects on learning and cognition that other drugs don’t have,” says Jodi Gilman, a Harvard Medical School researcher who has been studying the brains of human marijuana users.  “It looks like the earlier you start, the bigger the effects.”

That relatively measured tone is a far cry from the shrill warnings of Harry J. Anslinger, the first commissioner of the Federal Bureau of Narcotics, who in the 1930s set the standard for America’s fraught debate over marijuana with wild exaggerations. “How many murders, suicides, robberies, criminal assaults, holdups, burglaries and deeds of maniacal insanity it causes each year, especially among the young, can only be conjectured,” he wrote as part of a campaign to terrify the country.  As recently as the 1970s, President Richard Nixon talked about the drug as a weapon of the nation’s enemies. “That’s why the communists and the left-wingers are pushing the stuff,” he was recorded saying in private. “They’re trying to destroy us.”

The official line today is better grounded in data and research.  And the new focus is squarely on brain development. “I am most concerned about possibly harming the potential of our young people,” says Dr. Nora Volkow, the head of the National Institute for Drug Abuse (NIDA).... “That could be disastrous for our country.”  But decades of prohibition and official misinformation continue to shape public views....

As states now rush to legalize pot and unwind a massive criminalization effort, the federal government is trying to play catch-up on the science, with mixed success.  The only federal marijuana farm, at the University of Mississippi, has recently expanded production with a $69 million grant in March, and Volkow has expressed a new openness to studies of marijuana’s healing potential.   In the coming months, Uncle Sam will begin a 10-year, $300 million study with thousands of adolescents to track the harm that marijuana, alcohol and other drugs do to the developing brain.  High-tech imaging will allow researchers for the first time to map the effects of marijuana on the brain as humans age.

But scientists and others point out that a shift to fund the real science of pot still has a long way to go.  The legacy of the war on drugs haunts the medical establishment, and federal rules still put onerous restrictions on the labs around the country that seek to work with marijuana, which remains classified among the most dangerous and least valuable drugs.  “We can do studies on cocaine and morphine without a problem, because they are Schedule II,” explains Fair Vassoler, a researcher at Tufts University... who has replicated Hurd’s rat experiment with synthetic pot.  “But marijuana is Schedule I.”

It's interesting to look at the data from evidenced based research. The problem for the NIDA is that they are funded and have a government mandate to warn about the dangers of drugs.

They cannot really use their office to report the positive outcomes, or even those that show little or minimal harm.