"New Challenge for Police: Finding Pot in Lollipops and Marshmallows" 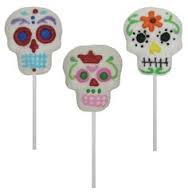 The title of this post is the headline of this new New York Times article, which includes these excerpts:

After nearly 20 years on the job, Jim Jeffries, the police chief in LaFollette, Tenn., has seen his share of marijuana seizures — dry green buds stashed in trunks or beneath seats, often double­bagged to smother the distinctive scent. But these days, Chief Jeffries is on the lookout for something unexpected: lollipops and marshmallows.

Recently his officers pulled over a Chevy Blazer driven by a couple with three children in tow. Inside, the officers discovered 24 pounds of marijuanalaced cookies and small hard candies shaped like gingerbread men, plus a tub of pungent marijuana butter perfect for making more. The bags of Kraft marshmallows looked innocent enough. But a meat injector was also found in the car. After searching the Internet, Chief Jeffries realized that the marshmallows probably had been infused with the marijuana butter and heat­sealed into their bags....

Across the country, law enforcement agencies long accustomed to seizures of bagged, smokable marijuana are now wrestling with a surge in marijuana­-infused snacks and confections transported illegally across state lines for resale.

Pot edibles, as they are called, can be much easier to smuggle than marijuana buds: They may resemble candy or home­baked goodies, and often have no telltale smell. And few police officers are trained to think of gummy bears, mints or neon­colored drinks as potential dope.

Some experts worry that smuggled pot edibles will appeal to many consumers, particularly adolescents, who are ill prepared for the deceptively slow high. Impatient novices can easily eat too much too fast, suffering anxiety attacks and symptoms resembling psychosis. Already, young children have eaten laced sweets left within reach. Many live in states where there has been no public education about responsible consumption of marijuana.

“Citizens in nonlegalization states are far less likely to be receiving those messages, so their risks are probably greater,” said Robert J. MacCoun, a professor of law at Stanford who recently co­wrote an editorial in The New England Journal of Medicine urging stronger regulation of pot edibles.

There are no hard numbers for the amount of pot edibles being trafficked interstate, but police departments in a variety of jurisdictions without legal sales report seizing increasing amounts in the past year. The quantities suggest the products are intended to supply a growing demand, law enforcement officials say....

The popularity of confections laced with marijuana has caught many health officials by surprise. Pot edibles took off in 2014, the first year of recreational sales in Colorado, when nearly five million individual items were sold to patients and adult users. Demand in Colorado and Washington State has spawned a stunning assortment of snacks and sweets, from Mondo’s sugar­free vegan bars to Dixie Edibles’ white chocolate peppermint squares.

Today consumers 21 and older can legally buy pot edibles in those two states; soon adults in Oregon and Alaska will join them. Pot edibles are available to medical users in at least a half dozen of the 23 states with medical marijuana programs.

Edibles make sense for marijuana entrepreneurs. In the past, marijuana buds were sold, and the rest of the plant was usually discarded. But with an extraction machine, makers of edible products can use the entire plant. “In a world where THC becomes inexpensive, you would like to differentiate your product from other people’s products in ways that allow you to maintain a higher profit margin,” said Jonathan Caulkins, a co­author of “Marijuana Legalization,” who has studied black markets for cocaine and marijuana. “Edibles offer some opportunities for that.”...

The manufacturers themselves say they receive constant requests for outof­state shipments. James Howler, the chief executive of Cheeba Chews, based in Denver, said his team fields emails from people nationwide — from epilepsy patients in Iowa to a retired mechanic in Florida, all of whom would rather snack on marijuana than smoke it.

“The needs and curiosity from around the country can be overwhelming,” he said. Still, Mr. Howler said, he declines them all. “It is highly illegal, and stupid to think we would risk everything,” he said.