Newest (and most interesting?) laboratory experiment with marijuana reform officially underway in Alaska 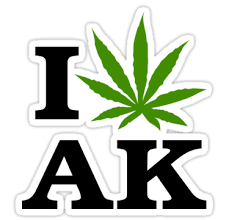 As detailed in this lengthy AP piece, headlined "No street parties, no citations: Alaska quietly ushers in legalized marijuana," the state nicknamed The Last Frontier is now an important and especially interesting new frontier in the state-level laboratories of democracy experimenting with recreational marijuana reforms. Here are the basics:

Alaska on Tuesday became the third U.S. state to legalize marijuana. But the historic day passed with little public acknowledgement in a state with a savvy marijuana culture that has seen varying degrees of legal acceptance of the drug for 40 years.

Supporters said the day was a milestone, comparing it to the end of Prohibition. But unlike in Colorado and Washington state, there were no street parties and public smoking displays in Alaska's biggest cities.

Dolly Fleck-Phelps, a Kenai resident with an ancillary marijuana business, said she thought people would look back on the day as a turning point for Alaska. "Absolutely this is history in the making," Fleck-Phelps said. "This is the opening of the door. Now it's time for the real work to begin."

Legalization marked the end of a 43-year political battle for Bill Parker, 70. The Anchorage man, who was listed as a sponsor of the initiative, first banded together with a group of young Democrats elected to the state House of Representatives to introduce a legalization bill in 1972. "Gee, there weren't enough votes to worry about," the retired deputy commissioner of corrections said.

Parker's hopes for legal weed dwindled as he saw Alaska become more Republican and more conservative over the years. He said perhaps the marijuana vote marks the end of that pendulum swing. Now that pot is legal, Parker is ready to take a pause to enjoy the moment, but he said he won't stop fighting. "Well, it makes me feel good. It's not over, of course. The initiative passed by between 5 and 6 percent, so 40 some percent of the people voted against it. Not all of them are ready to lay down and go along," Parker said....

Alaska has had a complicated history with marijuana over the years. The Alaska Supreme Court in 1975 said personal marijuana possession was protected under the state constitution's right-to-privacy clause. In 1998, voters legalized medicinal marijuana. But over the years, state lawmakers twice criminalized any possession, creating an odd legal limbo, and never created rules for medical marijuana dispensaries to operate.

Placing Alaska in the same category as Washington state and Colorado with legal marijuana was the goal of the pro-pot coalition that included libertarians, rugged individualists and small-government Republicans who prize the privacy rights enshrined in the Alaska state constitution....

As of Tuesday, adult Alaskans can not only keep and use pot, they can transport, grow it and give it away. A second phase, creating a regulated and taxed marijuana market, won't start until 2016 at the earliest. That's about the same timeline for Oregon, where voters approved legalizing marijuana the same day as Alaska did. But the law there doesn't go into effect until July 1.

Police throughout Alaska were prepared to hand out $100 citations for anyone caught smoking pot in public, but departments stretching more than 1,100 miles from Nome on the state's western coast to Juneau in the southeast panhandle hadn't issued a ticket during the day. "We haven't even received a call or complaint about anybody doing it," said Steve Goetz, deputy chief for the University of Alaska Fairbanks police department....

Others remained concerned on Tuesday about the details not yet worked out regarding legalization. When the public voted last November to legalize marijuana use by adults in private places, voters left many of the details to lawmakers and regulators to sort out. Elisabeth Schafer, a Sitka resident visiting Juneau for work, said she was worried about the state developing a workable system of regulations. "I just wish we had waited longer as a state," Schafer said. "I don't want to blaze the way for other states."

Among the questions remaining on Tuesday were what public places consumption was prohibited in, and how the regulations for a new commercial industry would look. The initiative bans smoking in public, but it doesn't define what that means, and lawmakers left the question to the alcohol regulatory board. There were missteps even as the board decided pot can't be smoked in places generally accessible to the public, like parks, schools or on the street in Alaska.

Board members met via a teleconference Tuesday, but it started late because organizers gave out the wrong telephone number. The call originated from the board's Anchorage office. However, a locked gate blocked access to the meeting site.

I think Alsaka is an especially interesting state to watch closely in the months and years ahead because it is such a unique state in so many ways: its size, small population, history of libertarian/conservative values and its relative isolation from the rest of the US. Also, Alaska as part of the second set of jurisdictions legalization recreational marijuana, can and should be able to draw some regulatory lessons from Colorado and Washington as it creates a new regulatory structure for a commercial marijuana industry. And, especially as debate over federal marijuana reform begins to heat up in Congress in the months and years ahead, Alaska's two GOP senators might provide to be especially important national players within the establishment of the political party that has been recently most resistant to reform of federal criminal drug laws.