Are hundreds of tribal communities going to enter the marijuana business? 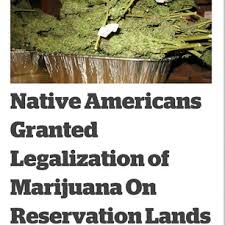 The question in the title of this post is prompted by this recent Huffington Post piece headlined "More Than 100 Native American Tribes Consider Growing Marijuana." Here are excerpts:

More than 100 Native American tribes have reached out to FoxBarry Farms, a management firm building the nation's first marijuana facility on tribal land, over the past month to express interest in the cannabis industry.

FoxBarry CEO Barry Brautman, whose company also works with tribes to build and operate casinos, told The Huffington Post there has been a surge of interest since the Department of Justice's announcement late last year that tribes are free to grow and sell marijuana on their lands as long as they adhere to specific guidelines. "I really underestimated," Brautman said. "So many tribes are wanting to do this right now."

Brautman, along with the Denver-based United Cannabis Corp., recently inked a contract to build a giant medical marijuana growing operation on the Pinoleville Pomo Nation's ranch in Northern California. The $10 million, 2.5-acre facility will include spaces for cultivating, processing and selling products under the United Cannabis brand. Brautman said the operation plans to hire 50 to 100 employees, with preference to tribe members.

As more states legalize marijuana for both medical and recreational purposes, the burgeoning industry may provide an economic boon for tribes across the country, Brautman explained. He's currently in talks with three other California-based tribes, as well as groups in seven other states. He said he hopes to finalize new deals every few weeks in the coming months.

"Tribes want what any government wants for its people, and that's financial independence," Brautman said. "They want to earn their own money, provide education, health care and housing. This new industry allows them to be more economically independent."

A U.S. Department of Justice memo issued in December states that Native Americans are free to grow and sell marijuana as long as they adhere to the same federal guidelines that govern state-legal operations. While marijuana remains illegal under federal law, 23 states have legalized cannabis for medicinal purposes, and four states and the District of Columbia have laws that permit recreational use....

Following the Justice Department memo, some speculated that tribes would be reluctant to pursue marijuana-related business ventures. "Henceforward, Indian nations are exempt from the federal government’s rules on marijuana," reads a Daily Beast article from December titled, "Tribes to U.S. Government: Take Your Weed and Shove It" It continues: "But the feds missed an important point when they failed to consult with the 568 recognized tribes in America: they didn’t want to be."

Tribes that express hesitance argue that the federal memo's vague wording may leave them vulnerable to prosecution. "It’s like the medical marijuana clinics here in California," Ron Andrade, director of the Los Angeles City/County Native American Indian Commission, told LA Weekly, referring to the hundreds of medical marijuana operations that have been targeted by federal prosecutors throughout the state. “Yeah, you can have one, but we’ll still arrest you.”

FoxBarry, however, isn't the only company being contacted by tribes eager to pursue opportunities in marijuana. Chad Ruby, the CEO of United Cannabis, told HuffPost that "dozens" of tribes have reached out to him as well. "This is just the start of our business model," he said. "It is absolutely our plan to team up with tribes all over the country."

Brautman said that for now, he will only enter cannabis-related projects with tribes whose land lies within states that already permit medical or recreational use, even though tribes from non-marijuana states have contacted him. "If an individual visits a reservation, purchases a product, then leaves, they're now in possession of a controlled substance," he said. "Although [tribes] still have the ability to do this legally, I don't think it makes sense from a business perspective."...

Troy Dayton, the CEO of marijuana research firm ArcView, told HuffPost that the Pomo Nation operation likely marks a much bigger trend. "It makes a lot of sense," he said. "It's the right move that Native American lands have been opened up to the same freedoms that states have -- my hunch is that this is the beginning of something larger."