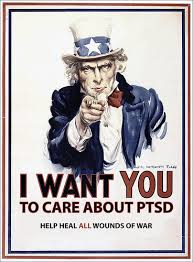 At a time when the legalized use of marijuana is gaining greater acceptance across the country, ... a growing number of veterans are coming out of the “cannabis closet” and pressing the government to recognize pot as a legitimate treatment for the wounds of war.  They say it is effective for addressing various physical and psychological conditions related to military service — from chronic back pain and neuropathic issues to panic attacks and insomnia — and often preferable to widely prescribed opioid painkillers and other drugs.

Researchers in the United States and several other countries have found evidence that cannabis can help treat post-traumatic stress disorder (PTSD) and pain, although studies — for instance, looking into the best strains and proper dosages — remain in the early stages. Veterans are lobbying for more states to legalize cannabis for medical use — 23 states and the District allow this — but the primary target is the federal government and, in particular, the Department of Veterans Affairs.

The federal government classifies marijuana as a Schedule I drug, the same as heroin and LSD, deeming that it has no accepted medical use and a high potential for abuse. That means that VA, which runs the largest network of hospitals and health clinics in the country, cannot prescribe pot as a treatment, even for veterans who live in a state where medical marijuana is legal.

VA says that its physicians and chronic-pain specialists “are prohibited from recommending and prescribing medical marijuana for PTSD or other pain-related issues.” Medical staff are also prohibited from completing paperwork required to enroll in state marijuana programs because they are “federal employees who must comply with federal law,” said Gina Jackson, a VA spokeswoman.

The swelling chorus of veterans who want to take advantage of marijuana but can’t reflects the growing disconnect between more tolerant state policies and the federal government’s unwillingness to budge. Advocates ... say it is urgent that the federal government recognizes marijuana as a treatment because there are so many veterans of recent wars....

If veterans report their use of marijuana to VA, they could face criminal charges if they live in a state where it is illegal. And though few have indeed been charged, the mere possibility has spawned a culture of “don’t ask, don’t tell,” said Michael Krawitz, a former Air Force staff sergeant and the director of Veterans for Medical Cannabis Access.

VA medical staff have warned that this culture is making for a dangerous situation, especially as more states legalize medical marijuana, because doctors do not know about all of the medications their patients are using. Patients are not routinely given drug tests, but those who are prescribed large amounts of opiates and risk overdosing can be asked to undergo screenings, which can turn up marijuana use. In 2011, VA issued a directive that said patients who were participating in state marijuana programs for pain cannot lose their VA benefits. VA added that it is up to individual patients to craft their “treatment plans” in consultation with their doctors.

Some patients say their VA doctors are making them choose between their prescription drugs and marijuana. “Doctors and administrators wrongly assume that the use of marijuana along with opiates is unsafe,” Krawitz said.

A study published last month in the journal JAMA Internal Medicine reported that “people already taking opioids for pain may supplement with medical marijuana and be able to lower their painkiller dose, thus lowering their risk of overdose.” The study, written by Marcus A. Bachhuber, a researcher at the Philadelphia Veterans Affairs Medical Center, and several colleagues, found that “medical cannabis laws are associated with significantly lower state-level opioid overdose mortality rates.”

Scott Murphy, a retired Army specialist who is the head of Veterans for Safe Access and Compassionate Care, has been compiling a petition asking that marijuana no longer be classified as a Schedule I drug. “Veterans in states without medical marijuana laws feel they need to lie to their physicians for the justifiable fear of losing their earned benefits,” Murphy writes in the petition....

Several VA doctors who specialize in pain management and PTSD said in interviews that they are eager for more research on the medical benefits of marijuana. The doctors, who spoke on the condition of anonymity because they do not have permission from VA to discuss marijuana with the news media, said they feel frustrated because prescription drugs are not helping patients who are suffering. “Anecdotally we know it works, and more and more studies are saying this,” said one VA doctor, a PTSD expert who leads a large East Coast VA pain center. “But we aren’t allowed to study it.”

Researchers at New York University’s Langone Medical Center are developing the first generation of cannabis-related medications targeted for PTSD, according to Alexander Neumeister, a professor of psychology and radiology who is supervising three drug trials. He said research has found that people with PTSD have lower levels of cannabinoid receptors in the brain. These receptors, called CB1, are activated when a person uses marijuana. “We are throwing the wrong pills at the problem and keep doing it,” Neumeister said. “It’s upsetting. It’s heart-breaking and it’s just wrong.”