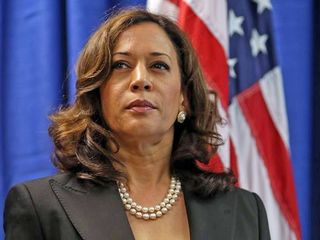 As reported in this BuzzFeed piece, which is headlined "California’s Attorney General Thinks Legal Weed Is Inevitable," the top lawyer in California had a a lot of interesting and notable things to say recently about marijuana reform.  Here are the details:

California Attorney General Kamala Harris, a rising star in the Democratic Party, says she’s “not opposed” to her state legalizing marijuana.  The state was one of the first to legalize medical marijuana in 1996, but so far hasn’t legalized it for recreational use, like Colorado, Washington, and others.

“I am not opposed to the legalization of marijuana.  I’m the top cop, and so I have to look at it from a law enforcement perspective and a public safety perspective,” Harris told BuzzFeed News in an interview in Washington, D.C. “I think we are fortunate to have Colorado and Washington be in front of us on this and figuring out the details of what it looks like when it’s legalized.”

“We’re watching it happen right before our eyes in Colorado and Washington. I don’t think it’s gonna take too long to figure this out,” Harris said. “I think there’s a certain inevitability about it.”

Harris is one of the few state-level officials appearing at an event on Wednesday at the Center for American Progress, an influential left-wing think tank seen as a feeder institution for the Obama administration.  Talked up as a contender to replace Eric Holder as attorney general, Harris, who is one of the Democratic Party’s likely prospects for higher office in California, said that even with legalization it’s important that states have systems in place for regulating use of the drug.

“It would be easier for me to say, ‘Let’s legalize it, let’s move on,’ and everybody would be happy. I believe that would be irresponsible of me as the top cop,” Harris said.  “The detail of these things matters.  For example, what’s going on right now in Colorado is they’re figuring out you gotta have a very specific system for the edibles. Maureen Dowd famously did her piece on that…  There are real issues for law enforcement, [such as] how you will measure someone being under the influence in terms of impairment to drive.”

“We have seen in the history of this issue for California and other states, if we don’t figure out the details for how it’s going to be legalized the feds are gonna come in, and I don’t think that’s in anyone’s best interest,” Harris said....

“I don’t have any moral opposition to it or anything like that.  Half my family’s from Jamaica,” Harris said with a laugh.

UPDATE:  I just noticed that our Senior Superstar California Correspondent, Alex Kreit, also posted here about AG Harris's comments. His post, titled "Kamala Harris Coming Around on Marijuana Legalization," includes a lot of astute political observations about the importance of what AG Harris is now saying.