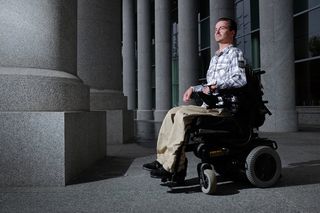 The Gray Lady continues to do important reporting and advocacy concerning marijuana reform as evidenced by this recent article headlined "Legal Use of Marijuana Clashes With Job Rules." Here are excerpts from this piece:

Brandon Coats knew he was going to fail his drug test. Paralyzed in a car crash when he was 16, he had been using medical marijuana since 2009 to relieve the painful spasms that jolted his body.  But he smoked mostly at night, and said marijuana had never hurt his performance answering customer calls for a Colorado satellite-television provider....  “There are a lot of people out there who need jobs, can do a good job, but in order for them to live their lives, they have to have this,” said Mr. Coats, who is 35. “A person can drink all night long, be totally hung over the next day and go to work and there’s no problem with it.”

But when it comes to marijuana, Mr. Coats and other users are discovering that marijuana’s recent strides toward the legal and cultural mainstream are running aground at the office.  Even as 23 states allow medical or recreational marijuana, employment experts say that most businesses are keeping their drug-free policies. The result is a clash between a culture that increasingly accepts marijuana and companies that will fire employees who use it....

Employers and business groups say the screenings identify drug-abusing workers, create a safer workplace, lower their insurance costs and, in some cases, are required by law.  But marijuana advocates say the prohibitions amount to discrimination, either against people using marijuana to treat a medical condition or against people who smoke it because they simply have the legal right to do so, off the clock and away from the office.   “It wasn’t like I was getting high on the job,” Mr. Coats said. “I would smoke right before I go to bed, and that little bit would help me get through my days.”

On Sept. 30, he will take that argument before the Colorado Supreme Court in a lawsuit challenging his 2010 firing. For years, courts in Colorado and across the country have ruled against marijuana users, saying that companies have the right to create their own drug policies. But legal experts say that if Mr. Coats prevails — he lost 2-1 in an appellate ruling — his case could transform how businesses must treat marijuana users.

Relatedly, the NYTimes had this editorial headlined "Obsolete Zero Tolerance on Pot."

Here's a link to a New Jersey case which presents a similar issue though the story indicates that the employer may be attempting some sort of compromise/reasonable accomodation:
http://www.nj.com/mercer/index.ssf/2014/09/princeton_univ_employee_will_use_medical_marijuana_deal_with_the_consequences.html