"Are cities being racially discriminatory in banning legal marijuana?" 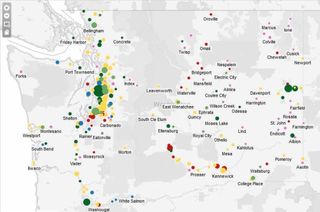 The title of this post is the headline of this very intriguing piece from the Seattle Times, which spotlights a very interesting new lawsuit filed in Washington concerning a local ban on marijuana sales.   Here are the details:

The growing number of cities and counties in Washington opting out of Washington’s marijuana legalization experiment is eating away at the foundation of Initiative 502, as a Seattle Times editorial in Thursday’s paper suggested. The lack of stores in widening swaths of the state perpetuates the black market and maintains underground access of youth.

A new lawsuit filed in Benton County Superior Court against Kennewick’s ban takes the argument further: Bans are also racially discriminatory. The suit, filed on behalf of a would-be marijuana company, suggests that Kennewick’s ban (as well as similar prohibitions in all three Tri-Cities and Franklin County) push the underground marijuana trade to poorer neighborhoods. Since marijuana is a cash cow for gangs, they’ll continue to battle for turf.

The lawsuit makes some broad assumptions, including that white marijuana users primarily buy from “friends,” and most transactions occur in private homes.... “Minorities and minority children, who reside in racially segregated, high poverty rate neighborhoods in Kennewick, where black market transactions do not occur in private between friends, but instead on the public streets, are therefore disproportionately subjected to violence as a product of the black market trade as compared to whites.”

Attorney Liz Hallock, who filed the suit on behalf of American Weed LLC, summed it up: “This is white people who don’t see the effect of a ban on their street corners.”

The case is scheduled for a hearing next week. Whether it is successful or not, the legality of these municipal bans is likely headed to the state Supreme Court, as another lawsuit, against Fife, is being directly appealed to the high court. These cases will hinge on a lack of specific authority in I-502 for cities and counties to opt out. Attorney General Bob Ferguson issued a non-binding opinion in January that they have an implied right under the state Constitution, which spurred jurisdictions queasy about marijuana to drop the curtain on I-502.

The ACLU’s Alison Holcomb, the architect of the initiative, believes the question about the bans falls to the Legislature: “Are we going to allow opt-out (from I-502), and under what circumstances?” State liquor laws, for example, require an alcohol ban to be put to voters. If state law now treats marijuana like liquor, shouldn’t voters get a say on pot bans?

The Legislative debate is likely to center on whether cities and counties get some of the 25 percent marijuana excise taxes in exchange for accepting state-licensed I-502 businesses. Holcomb said municipalities should have to justify their costs, because legalization, in theory at least, would lower criminal justice costs. “Cities and counties need to make the case and tie the request to the needs,” she said.

Until the Legislature, or the court, acts, the bans are here to stay.