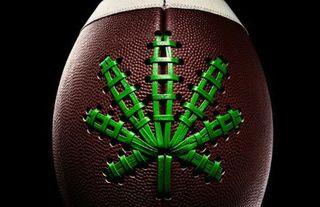 As reported in this new article, headlined "NFL might legalize medical marijuana for players," National Football League Commissioner Roger Goodell has recently suggested the most important sports league in the world is open to marijuana reform. Here are the basics:

Speaking to ESPN, National Football League Commissioner Roger Goodell suggested the sport’s ban on medical marijuana could be lifted in the future if the practice has already been legalized in a player’s state.

"I don't know what's going to develop as far as the next opportunity for medicine to evolve and to help either deal with pain or help deal with injuries, but we will continue to support the evolution of medicine," he said.

Although multiple teams play in states where medical marijuana is legal – not to mention that Colorado and Washington have legalized the drug outright – use of the substance remains prohibited under the NFL’s collective bargaining agreement. The 10-year agreement isn’t set to expire until 2021, leaving no opportunity for players to renegotiate the policy in the short term.

As CBS News noted, Goodell’s words are the first time the NFL has commented on marijuana use since Colorado and Washington passed ballot initiatives legalizing the drug back in 2012. "The NFL's policy is collectively bargained and will continue to apply in the same manner it has for decades," league spokesman Greg Aiello said at the time. "Marijuana remains prohibited under the NFL substance abuse program."

Still, the collective bargaining agreement’s content is not as black and white as the NFL may believe. According to Pro Football Talk, the CBA only bans the “illegal use” of marijuana, meaning a potential gray area exists concerning situations and states where legal/medical marijuana is permitted.

Complicating the situation is that many NFL players suffer from significant pain borne from concussions and brain trauma, the symptoms of which could be eased by marijuana. “Medical marijuana is recommended by doctors for headaches, light-sensitivity, sleeplessness and loss of appetite—all of which happen to be symptoms associated with concussions,” the Nation noted on its blog in 2012. “The idea that the league would deny a player their legal pain relief of choice seems barbaric.”

Echoing this sentiment was ESPN’s Howard Bryant, who argued in December the time has come for the NFL to become the first major sports league to condone the drug’s use as a pain reliever. “This is a league in which the locker room culture still demands that athletes play through [the pain],” Bryant wrote. “And given that marijuana is a legitimate pain reliever -- especially for the migraines that can be a byproduct of head trauma -- and is far less dangerous and potentially addictive than, say, OxyContin, it is almost immoral to deny players the right to use it.”

Writing in a similar vein, Steve Fox authored this op-ed published recently in the Washington Post headlined "The NFL should let its players smoke pot."

Adding some current event intrigue to this story is the interesting coincidence that the final four teams in the NFL playoffs this year all hail from state in which medical or recreational marijuana is legal (California, Colorado, Massachusetts, and Washington).  Indeed, both of the big championship games are being played in states that have legalized recreational marijuana, and in every playoff matchup the team coming from the state with more liberal legal marijuana policy has beaten a team from a state with a more restrictive policy (including the big upset of the San Diego Chargers beating the Cincinnati Bengals and the San Francisco 49ers winning twice on the road).

Am I foolish to suggest maybe teams hailing from states with some kind of legal pot are doing better because the players and their fans are just a bit more mellow going into the playoffs?  Dare I start urging marijuana reform in Ohio so that the sad-sack Bengals and long-cursed Cleveland Browns get a better chance to make it to the Super Bowl?

"I am favor of legalization of medical marijuana and it is actually interesting to see that one of the world’s biggest sports leagues is open to marijuana reform, but legalizing marijuana for sportsmen doesn’t sound healthy.
Even though there is nothing wrong with the evolution of medical marijuana, still there are, and can be, better alternatives to help players deal with injuries and pain. A doctor recommending common people medical marijuana for body pain, loss of appetite, headache and insomnia is understandable, but making it legal for players will be like encouraging doping!
"