"Marijuana Legalization: The Republican Argument For Doing It" 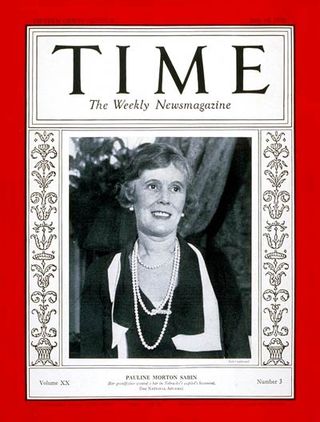 The title of this post is the headline of this lengthy new commentary by journalist Ryan Schuette. Here is how it gets started:

“Children are growing up with a total lack of respect for the Constitution and for the law," Pauline Sabin, the first woman to sit on the Republican National Committee, said in regard to prohibition in 1932. "The young see the law broken at home and upon the street," she added. "Can we expect them to be lawful?”

Sabin was the founder of the Women’s Organization for National Prohibition Reform that helped legalize the sale of alcohol. She graced the cover of Time magazine in 1932 for inspiring the movement to overturn the disastrous eighteenth amendment that helped finance Depression-era lawlessness.

Republicans could take a page from her playbook on the issue of marijuana prohibition today. With non-violent arrests occurring every 36 seconds, overcrowding our prisons, and depleting billions of dollars from our federal and state coffers every year, we — all Americans — should consider prohibition repeal as critical to the state of our nation as debt reduction and healthcare reform.

Doubt me? If I can change my mind, so can you. In 2009, I helped manage a Republican primary campaign in my congressional district to oust Rep. Ron Paul (R-TX), my congressman. One newsletter that I signed as campaign director called weed a “troubling substance” and any measure to normalize it a “blatant disregard” for our district’s values.

My position was pretty standard. Bush speechwriter David Frum, notable for styling himself right-of-center on issues like gun violence, recently echoed the same rhetoric in an op-ed for CNN, warning of the rise of “Big Marijuana” and calling any medicinal use a “laughable fiction.”

Here's the thing: Sabin was right, Frum is wrong, and I was once as wrong as my pro-temperance great-grandmother. We need Big Marijuana. Republicans owe it to their party as much as our Constitution and nation to help decriminalize, legalize, tax, and regulate it as soon as possible.

The benefits far outweigh fears about gateway addiction and moral decline as dated as those of the Temperance Movement.

Here are the bolded headings that follow thiscommentary's introduction and provide a summary of the substantive points that follow:

2. We could unplug overcrowded prisons and save tax dollars

3. Legalization could help starve violent cartels at home and abroad

4. We could ease suffering for those who live with chronic illnesses

There are certainly a lot of things to consider when speaking about marijuana legalization. It will be interesting to see how it all plays out. It is rather comical that in some parts of the country marijuana is perfectly legal and quickly becoming a norm among society but in a different part of the nation, having anything to do with the plant is not only considered morally wrong but illegal.