Can we rank the "best" and "worst" medical marijuana states? By what metrics? 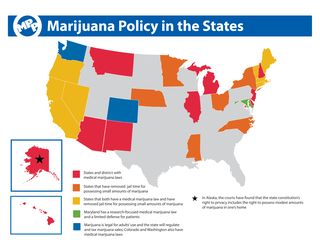 As I continue to think about pros and cons of various possible state regulatory regimes for the legalization of marijuana, I continue to notice the significant differences between the rules and regulations that control medical use of marijuana in the 20+ jurisdictions that have legalized this use.  (This list of state Medical Marijuana Laws assembled by NCSL provides an effective summary of these realities.)  And especially because there are so many rankings of various states on so many different kinds of metrics --- on topics ranging from business climate to freedom to happiness to inovation to government mismanagement --- I am not wondering whether it would be a good idea to try to develop a ranking of the "best" and "worst" medical marijuana states.

I was unable to find such a ranking and this is surely understandable given the views of partisan advocacy groups focused on marijuana law and policy: advocates for marijuana reform are, in most respects, happy and eager to praise any and every state to have any kind of medical marijuana law; while advocates against marijuana reform are, in most respects, unhappy and eager to criticize any and every state that moves away from blanket marijuana prohibition.  But, of course, voters and their elected representatives (not to mention academic researchers) are not partisan advocates, and it would likely be a significant contribution to the reform discourse to have some kind of ranking(s) of those states that have already adopted various medicial marijuana regulatory regimes.

Of course, as the title of this post highlights, any such ranking of medical marijuana states would need to develop some metrics for deciding what are the "best" and "worst" regulatory regimes, and this in turn would require a bunch of contestable normative judgments about what makes for good and bad impacts from medical marijuana laws.  But that very challenge --- i.e., deciding whether and how to measure and consider in a cumulative ranking factors like ease of access for ill patients, a state's collected tax revenues, drugged driving statistics, teen marijuana use and abuse --- would both help illuminate what might be considered most important in reform debates and might allow deeper and more informative analysis of state-level impacts from diverse regulatory regimes.