This post was written by Nate Ela, of COWS.

Last Sunday, I got into a taxi at Logan airport in Boston. The driver was Somali, a refugee to the United States, and on my way home we got to talking about how he ended up on the east coast. He had followed his wife, he said, from Minneapolis. For Somali refugees, he explained, that's the place to be – a huge community, even which includes former government ministers who are now professors at colleges in the Twin Cities. He'd initially been resettled in San Diego, because of its similarity to Somalia's climate. But within a couple years he joined family members in Minnesota. Why so many Somalis had chosen to move to such a cold state, he had no idea. But he was looking forward to moving back to the upper midwest soon.

Over the past couple of days, state-level refugee policy has hit the headlines in a big way. At latest count, twenty-seven governors have declared that they would refuse refugees from Syria, for fear that they might be terrorists in disguise. This has prompted some commentators to ask whether such policies would have any legal basis. Ian Millhiser, writing for ThinkProgress, suggests that the Supreme Court’s 2012 decision in Arizona v. United States would also apply in this case: the federal power to determine immigration policy would preempt any state attempt to legislate in that domain.

Over at Mother Jones, Tim Murphy provides some more details about the resettlement process, and notes that a State Department spokesman, when asked about the governors’ resistance, said, “Whether they can legally do that, I don't have an answer for you… I think our lawyers are looking at that.” Murphy notes that some people in the business of resettling refugees have already arrived at an answer to the legal question -- the governors don't have a leg to stand on. He quotes Jen Smyers, associate director for immigration and refugee policy at the Church World Service. Governors, she says, “don't have the legal authority to stop resettlement in their states—much less to stop the presence of a legally authorized individual based on nationality.” Smyers points out that “really clear discrimination protections” block states from barring entry based on where someone is from.

There's a good chance that the governors’ protestations are little more than election-year bluster -- refugees are easy to pick on, since by definition they can't vote you out of office. Or, they may be efforts to avoid a bind like the one that Governor Bill Clinton wound up in when President Carter sent Cuban refugees from the Mariel boatlift to Arkansas in 1980. If the governors back down, or manage to get Republicans in Congress to close the door entirely to Syrian refugees, this episode may not turn out to be a reprise of Arizona v. United States.

But beyond the legal questions at stake, the governors’ stance got me thinking back to my cab driver. What could possibly have stopped him from moving from San Diego to Minneapolis, and then on to Boston? Maps of the states where governors have come out in opposition to resettlement (via Vox), and states where Syrian refugees have resettled (via the New York Times) suggest more plausible scenarios for internal migration by Syrian refugees. 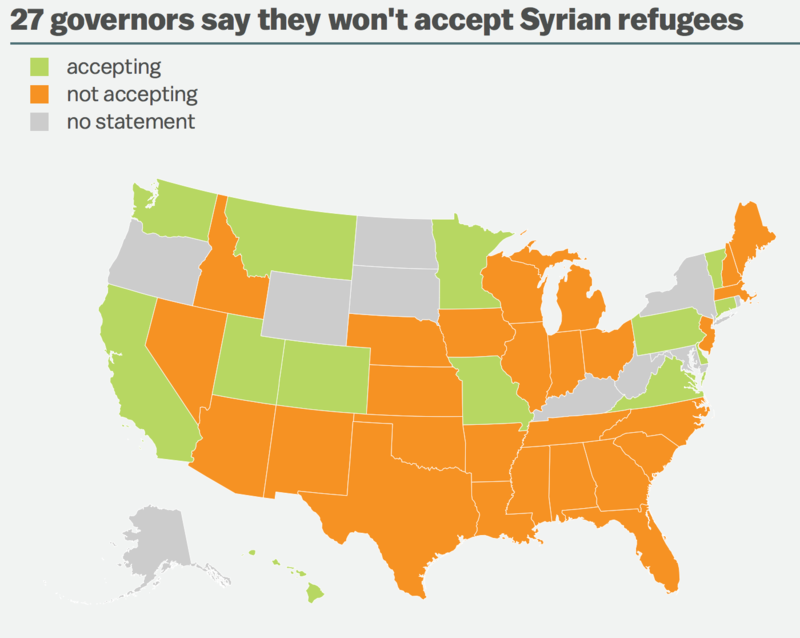 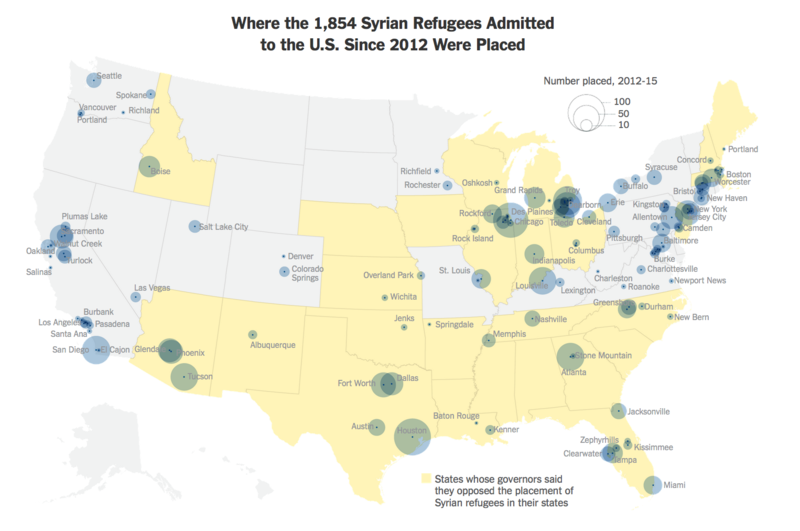 Say the Obama administration simply chose to resettle Syrian refugees in states where governors have said their doors are open, such as California or Minnesota. What if refugees then moved to cities that already have the beginnings of Syrian refugee communities? Such a process of chain migration might result in refugees moving to Houston, Atlanta, or Chicago – all in states where governors have declared they don’t want any more refugees.

For anti-refugee governors, this would create logistical nightmares. How could they hope to stop such internal migration? Border checkpoints? Passport checks at airports for domestic flights? Raiding suspected migrant enclaves and deporting refugees to other states? Yesterday, the GOP Caucus Chairman of Tennessee's house of representatives said that he's "not worried about what a bureaucrat in D.C. or an unelected judge thinks. ... We need to gather (Syrian refugees) up and politely take them back to the ICE center and say, 'They’re not coming to Tennessee, they’re yours.'" Apparently for some, having a legal basis simply doesn't matter.

The more one thinks about it, the messier it gets. Maybe anti-refugee governors simply didn't think through the next move after their opening gambit. Unless Congress bails them out, any state-level "solutions" to the problems that internal migration would pose for anti-refugee governors could turn out to be actual nightmares. Congressman Luis Gutierrez has likened the anti-refugee governors’ stance to the creation of internment camps for Japanese Americans during World War Two. One wonders which governor will be the first to propose a "compromise" solution: refugees can resettle -- but only if they are confined to camps.