On Right to Work, Part 3: Imagining new models, and policies, for unionism

Half of the states in the U.S. now have “right to work” laws on the books. As earlier posts this week have discussed, such laws do not create anything resembling a real right to work. To the contrary, they create a legal privilege to have job that is covered by a collective bargaining agreement, without paying dues or joining a union.

Legalizing free-riding creates serious problems for labor unions. For decades, their membership and fundraising model has relied on dues collected from members at workplaces with collective bargaining agreements. When workers can free-ride on such agreements, both membership and dues drop off. One study found that within a decade after the passage of “right to work” laws, states generally see a 5% drop in the number of union members. This is a major hit, even in the context of a gradual decades-long decline in union density in every state (NPR’s Planet Money created a map that illustrates the decline over the past 50 years.)

The secular decline and deliberate legislative dismantling of the old model has prompted attempts to imagine what new models for labor unions might look like, and how legislative changes might support them. In a 2006 article in The Nation, Richard Freeman and Joel Rogers proposed a model of “open source unionism,” in which unions would use digital tools to represent workers individually, even at workplaces not covered by collective bargaining agreements. The table below, from their book What Workers Want, summarizes the differences. 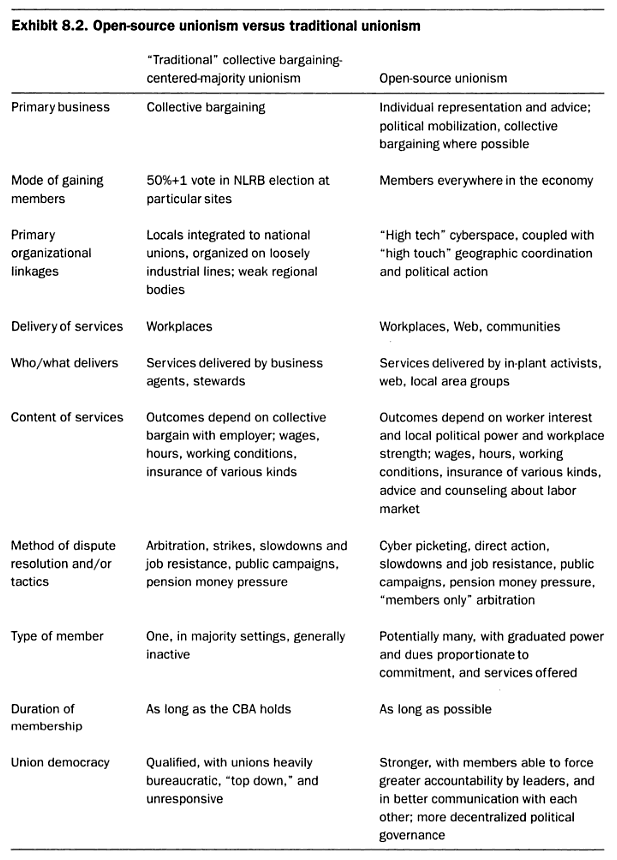 In a useful book that came out last year on innovative public policies to support low-wage workers, Freeman reports that a wide variety of “labor organizations,” many along the lines of open-source unionism, have emerged to provide services to workers in a time when unions can no longer do what they used to.

But even as new organizations emerge to represent workers in new ways, unions themselves must figure out new strategies for representing workers. A central element of a model along the lines of open-source unionism would be allowing unions to represent workers as individual dues-paying members, rather than as workers at a site covered by a collective bargaining agreement.

In “Restoring Equity in Right to Work Law,” Professors Catharine Fisk and Benjamin Sachs note how such individual representation would be problematic under current federal and state laws. Federal labor law, designed for the traditional model of unionism, requires unions to equally represent all workers in workplaces covered by collective bargaining agreements. In “right to work” states, workers in such workplaces can now decline to pay dues and join the union. Since unions are still required to represent all workers equally, they end up representing many nonpaying nonmembers. One of the possible solutions that Fisk and Sachs propose would be to change federal law so unions can represent only members who pay dues.

This and other ideas for how to reimagine labor law came as part of a thought-provoking symposium issue of the UC Irvine Law Review last May. If you’re not interested in reading all of the contributions, a recent Washington Post Wonkblog post summarized many of their proposals, which range from giving unions a role in immigration reform legislation, to making union elections automatic, to better protecting workers’ freedom of association.

At the moment, the form or forms that workplace democracy will take in the future remains uncertain. But the spread of right to work laws and other anti-union legislation is clearly provoking worker advocates to reassess and reimagine their strategies. Even as some commentators predict that a national right to work law could come within the next decade, the White House is planning a summit on labor for this fall. We can expect to see increasing interest in how labor laws might be changed to either defend the old model of unionism, or, perhaps more realistically, help shepherd a new one into being.