Marjorie Rombauer, the "Founding Mother" of the Field of Legal Writing Education, has Died 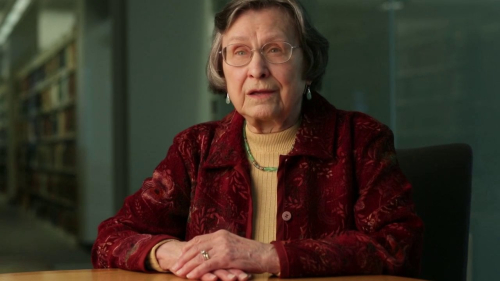 Professor Emeritus Marjorie Rombauer of the University of Washington School of Law, an icon in the field of legal research and writing education who has been described as the "Founding Mother" of Legal Writing Education, passed away on Friday, as reported by Professor Karin Mika in a post to the Legal Writing Listserve.
Marjorie Rombauer had a stellar career in service to the law community, legal education, and the justice system. She was a faculty member at the University of Washington School of Law for more than 30 years and served as acting dean in 1991. She was a prolific scholar whose works on legal problem solving, research, writing, and analysis informed generations of law students. Upon her retirement in 1994, an award was established in her name to honor her contributions to the legal writing field, presented annually to a person in the field by the national Association of Legal Writing Directors. In 2000, she was named one of the ten outstanding teachers in the first 100 years of the School of Law.
In her post to the Legal Writing Listserve, Professor Mika shared these thoughts about the legacy of Professor Rombauer and her important work for the field of legal writing education:

As most people in the profession know, our profession is a rather new one in terms of the history of legal education and was established initially by virtue of a handful of people fighting tirelessly for respect and credibility. 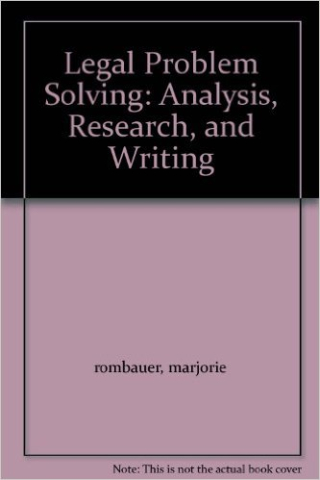 Marjorie Rombauer was one of these individuals, if not THE first person who dedicated her career to the profession.  Marjorie began teaching at the University of Washington in 1960, and by the time the first wave of "newbies" began the true development of Legal Writing in 1980, Marjorie was the matriarch to whom most people entering the field turned for advice and support.  She was omnipresent in every Legal Writing organization, and often provided the foundation on which so many conference panels were based.
She was the first person to self-publish a book explaining how to teach Legal Analysis -- a book that West Publishing would not publish because they did not believe there was much demand for it.  [West later changed its mind about the importance of textbooks for legal writing.]
She was also the person who helped convince the Association of American Law Schools that our Section name should contain the description of "Reasoning" so that others did not think we taught skills that should be separated out from legal thought or analysis.
. . .

Marjorie Dick Rombauer would eventually get her work published. Her books included Legal Problem Solving (pictured at left) and Legal Writing in a Nutshell (with Lynn Bahrych).
Professor Mika wrote further about her own good fortune of becoming friends with Marjorie during these past seven or eight years.  She shared these personal thoughts about her:

Marjorie was about as down to earth and humble as a person could possibly be.  She never felt that anything she did was much of a big deal, and was thrilled at the successes of those who followed in her footsteps. She was a lover of cats, and someone who, at the age of 75, could be found fixing the roof on her house.  She was extremely dedicated to family, and especially cherished the memory of her husband Edgar Rombauer, a notable attorney in his own right and who, interestingly enough, was the son of Irma Rombauer, author of the Joy of Cooking.  Marjorie told me the story about how Edgar disappointed his mother by deciding to be a photographer in the west rather than initially going into the legal profession in St. Louis. Fate brought Edgar into Marjorie's life as she was attempting to golf her way across the country starting from her home in North Dakota. She said she stayed in Seattle because she "ran out of money." Aside from law and golf and fixing things, Marjorie was an accomplished accordion player and spoke fluent Japanese.

For those who wish to know Marjorie a bit better, here is a link to an article written by Professor Mary Lawrence.

Here is also a video of Marjorie's remarks in 2011 upon accepting the 2011 Burton Award for Excellence in Legal Writing Education.

As Karin Mika wrote, "Marjorie Rombauer, legend and friend, will be greatly missed." We extend our sympathy to her colleagues, family, friends, and former students who were lucky enough to have her as a teacher.

Here are some additional stories about Marjorie Rombauer:

Click here for a story from the University of Washington School of Law.

Mark Hale and Ken Lowery, founders of a twitter feed that pokes fun at the Associated Press Stylebook, have published a book titled Write More Good. According to a review, the book features “snarky observations . . . and writing tips so awful they’re good—or at least hilarious.” Interviews with the book's authors and with a site contributor are available on line.

The second edition of Illinois Legal Research is now available!

The second edition of Illinois Legal Research shows how to find and stay current with Illinois cases, statutes, regulations, and local court rules. Focusing on state materials, it can be used as a supplement to national research texts or on its own to learn legal research. This book also explains how to locate secondary materials specific to Illinois law. Although the text was designed primarily for law students, seasoned attorneys will also appreciate the many secrets of Illinois legal research disclosed in this text. The book includes materials on citing Illinois law sources under the Bluebook (for both law review formats and practice documents), the ALWD Manual, and local court rules. It is an essential book for any Illinois law library and includes many research secrets of Illinois law.

Click here to read more about the new edition of Illinois Legal Research.  The link also includes a link that shows the table of contents.  The book is only $25.00 and the website is now offering a 10 percent discount.  The website also has a link for legal writing professors to order review copies.

Click here for more information about the Carolina Academic Press state legal research series.  The series editor is Suzanne Rowe, professor of law and Director of Legal Research and Writing at the University of Oregon School of Law.