Darby Dickerson, Dean of the UIC John Marshall Law School, has become President of the Association of American Law Schools. She is the first AALS President to come from the field of legal writing.

Among other contributions to the field of legal writing, she was the author of the first edition of the ALWD Citation Manual. She is a Past President and current Board Member of Scribes--The American Society of Legal Writers. 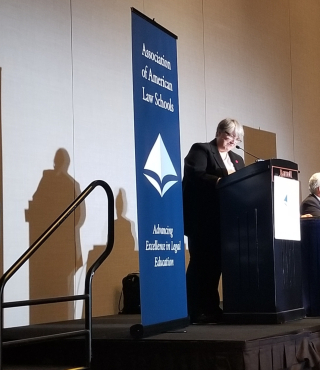 Dean Dickerson became President of the AALS this past weekend in Washington, D.C. during the Association's Annual Meeting. She follows Professor Vicki Jackson of the Harvard Law School who finished her term as AALS President. Dean Dicerkson will serve a one-year term until the AALS holds its next Annual Meeting in San Francisco next January. She has announced that the theme of the 2021 AALS Annual Meeting will be "The Power of Words."

The AALS is an association of 179 member and 18 fee-paid law schools. AALS member schools enroll most of the nation’s law students and produce the majority of the country’s lawyers and judges, as well as many of its lawmakers. Founded in 1900, the mission of AALS is to uphold and advance excellence in legal education. In support of this mission, AALS promotes the core values of excellence in teaching and scholarship, academic freedom, and diversity, including diversity of backgrounds and viewpoints, while seeking to improve the legal profession, to foster justice, and to serve its many communities–local, national and international.

From 2011-2016, Darby Dickerson served as Dean and the W. Frank Newton Professor of Law at Texas Tech University School of Law. Before that, she was Interim Dean and Dean at Stetson University College of Law in Florida from 2003-2011. She started her full-time academic career at Stetson, joining the faculty in 1995. At Stetson, she also served in a wide variety of other administrative roles, including Vice Dean, Associate Dean, Director of Legal Research and Writing, Moot Court Board Director, and Law Review Advisor.

Dean Dickerson received her B.A. and M.A. from the College of William & Mary, and her J.D. from Vanderbilt University Law School. She clerked for the U.S. Court of Appeals for the Sixth Circuit and practiced commercial litigation with the firm now known as Locke Lord in Dallas, Texas.

As Dean of The John Marshall Law School, Dean Dickerson brought about a successful merger of the law school with the University of Illinois at Chicago (UIC), creating the first public law school in Chicago.

We congratulate Dean Darby Dickerson on her many accomplishments in the field of legal writing and in legal education.