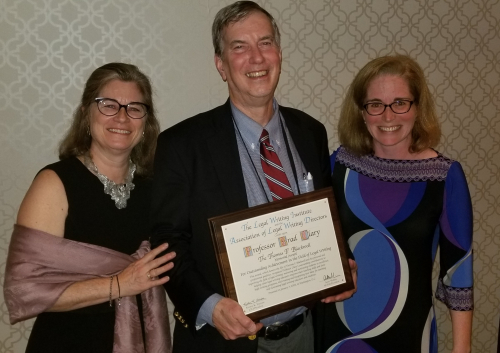 Bradley G. Clary, a Clinical Professor of Law at the University of Minnesota Law School, received the 2020 Thomas F. Blackwell Award in Washington D.C. during the 2020 Annual Meeting of the Association of American Law Schools. The award was presented by Professor Anne E. Mullins (Stetson University College of Law), who serves as President of the Association of Legal Writing Directors (ALWD), and Professor Kristen Konrad Tiscione (Georgetown Law), who serves as President of the Legal Writing Institute (LWI).

A video of Professor Clary's remarks upon receiving the Blackwell Award is available on the LWI Facebook Page, https://www.facebook.com/LWIonline/.

The Blackwell Award is jointly conferred by ALWD and LWI to recognize a person who has made an outstanding contribution to improve the field of Legal Writing by demonstrating:

This Blackwell Award honors the late Professor Thomas Blackwell (Appalachian Law School), who was killed by a disturbed student in January 2002. The award was first conferred in 2003, presented by Tom's widow Lisa Blackwell. Professor Blackwell was an active member of both the Association of Legal Writing Directors and the Legal Writing Institute, and the organizations joined together to present the award in his memory.

Professor Clary was recognized for his many contributions to the field of legal writing, including service as a Past President of ALWD, a contributor to the ABA Sourcebook on Legal Writing Programs, and service as the ALWD Liaison to the Council of the ABA Section on Legal Education and Admissions to the Bar.

Professor Clary joined this distinguished list of previous recipients of the Blackwell Award:

The Blackwell Award consists of a cash award of $1000, a plaque, and a desk lamp -- a symbol of the light that Tom Blackwell shed on his students and a reminder of his penchant for lightbulb jokes. [How many legal writing teachers does it take to change a lightbulb? We wish that we had the resources to change the lightbulb.]