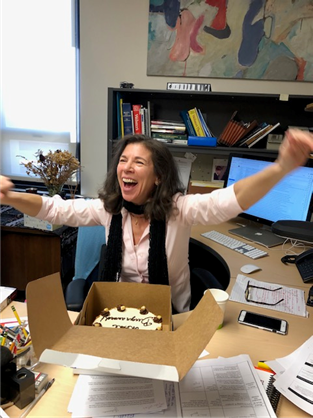 Kathryn M. Stanchi of the Temple University Beasley School of Law in Philadelphia, Pennsylvania, has been named as the winner of the 2019 Linda Berger Lifetime Achievement Award for Excellence in Legal Writing Scholarship.

The Berger Award is highest award conferred by the Association of Legal Writing Directors (ALWD) to recognize scholarship in the field of legal writing. The award recognizes lifetime dedication to and advancement of legal writing scholarship.  It celebrates those who have written influential articles, books, or essays or otherwise had a major impact on
scholarship, perhaps through making presentations, mentoring, serving on editorial boards of various publications, or sponsoring scholarship workshops.

ALWD shred a few excerpts from Professor Stanchi's nominators for this award:

[Kathy’s] lifetime dedication to the advancement of legal writing scholarship is unsurpassed. She is a renowned scholar but, equally important, she has worked tirelessly to build the discipline of LRW scholarship in myriad ways and she has mentored many, many members of the LRW community. Kathy’s work is unique in that it has continuously built connections between the legal writing community and others in the academy, both nationally and internationally.

[Kathy] has published books and articles prolifically for over 20 years. Her four books—including two by Cambridge University Press—are insightful, well written (of course), and provocative in the best ways. Her 20 articles have been published in mainline journals, in specialty journals dedicated to gender and human rights issues, and in legal writing and legal education journals. She reaches wide audiences and is regarded as one of the leading scholars from the legal writing discipline.

[As] the leader of the United States Feminist Judgments project, a project that reimagines and rewrites major judicial opinions from a feminist perspective, [Kathy’s] efforts have had a world-wide impact as the series has expanded internationally.  . . . She advocated for the project to include legal writing and clinical professors, and her effort has given over 30 LRW and clinical professors the opportunity to publish with the Cambridge University Press on a project that blurs lines between doctrine, theory, and skills.

The Berger Award will be presented on Friday, May 31, 2019 during the ALWD Biennial Conference in Boston, Massachusetts. The photograph was shared by Professor Stanchi's colleagues who told her that she would be receiving the Berger Award.

Professor Stanchi is the second recipient of the Linda Berger Lifetime Achievement Award for Excellence in Legal Writing Scholarship, which ALWD first presented to Professor Linda Berger in 2017.