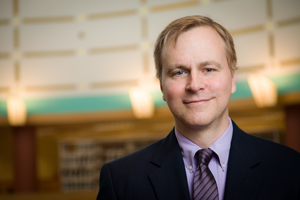 The faculty of Wake Forest University School of Law has voted to promote Hal Lloyd to Professor of Law. He is the first legal writing faculty member to apply for full tenure under the school's new unitary tenure standard.

Professor Lloyd graduated with High Honors from Duke University School of Law and magna cum laude from Davidson College, where he majored in philosophy. He was Vice President and General Counsel of The Fresh Market, Inc. for approximately ten years. Before that, he was a partner with the firm of Tuggle, Duggins & Meschan, P.A. where he had a general commercial practice. That practice included representing clients in commercial contracts, commercial leasing, commercial lending, intellectual property, and commercial bankruptcy law. Professor Lloyd has served as a co-editor-in-chief of The Second Draft, and has also served as the Ethics Chair for the Corporate Counsel Section of the North Carolina Bar Association.

Professor Lloyd's legal interests include law and language, semiotics of law, rhetoric, interpretation theory, commercial transactions and drafting, and legal education theory and reform. He also enjoys genealogy, verse composition (some of which has been set to music), and the art of translation. His translations include the complete epigrams of Palladas and various French works including Racine's Phedre and Moliere's Tartuffe.