Emojis and their real world uses

Will we now need to teach about translating emojis?  It's not just an accommodation that we would reluctantly be making for our students, but rather emojis (emoticons) are creeping into the our world as evidence that needs to be assessed.  In a recent  case, 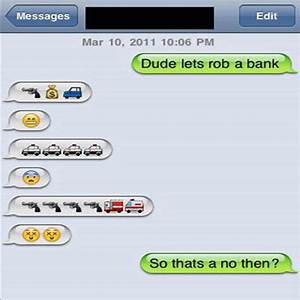 "Bay Area prosecutors were trying to prove that a man arrested during a prostitution sting was guilty of pimping charges, and among the evidence was a series of Instagram DMs he’d allegedly sent to a woman. One read: “Teamwork make the dream work” with high heels and  money bag emoji placed at the end. Prosecutors said the message implied a working relationship between the two of them. The defendant said it could mean he was trying to strike up a romantic relationship. Who was right?"

Emojis are not only coming up as evidence in criminal cases, but in civil cases as well:

"In 2017, a couple in Israel was charged thousands of dollars in fees after a court ruled that their use of emoji to a landlord signaled an intent to rent his apartment. After sending an enthusiastic text confirming that they wanted the apartment, which contained a string of emoji including a champagne bottle, a squirrel, and a comet, they stopped responding to the landlord’s texts and went on to rent a different apartment. The court declared that the couple acted in bad faith, ruling that the “icons conveyed great optimism” that “naturally led to the Plaintiff’s great reliance on the Defendants’ desire to rent his apartment[....]”

For an article about the status of emojis in our court system, click here

For an article about whether emoji is singular or plural, click here