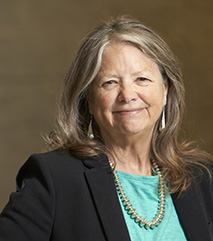 Professor Terrill Pollman of the William S. Boyd School of Law at the University of Nevada at Las Vegas has been named as the recipient of the 2019 Thomas F. Blackwell Memorial Award for Outstanding Achievement in the Field of Legal Writing.

This Blackwell Award honors the late Professor Thomas Blackwell (Appalachian Law School), who was killed by a disturbed student in January 2002. Professor Blackwell was an active member of both the Association of Legal Writing Directors and the Legal Writing Institute, and the organizations joined together to present the award in his memory. The award in the past has included a desk lamp, a symbol of the light that Tom Blackwell shed on his students and a reminder of his penchant for lightbulb jokes. [How many legal writing teachers does it take to change a lightbulb? We wish that we had the resources to change the lightbulb.]

Professor Pollman will join this list of 16 previous recipients of the Blackwell Award:

Professor Pollman was on the founding faculty of the law school at UNLV. She teaches in the areas of Lawyering Process, Persuasion, Negotiation, and Leadership and Law. She is a past president of the Association of Legal Writing Directors and the Managing Editor of the Journal of the Legal Writing Institute. Her scholarship focuses on legal writing, pedagogy and rhetoric. She is an author of Examples and Explanations: Legal Writing. She graduated from the University of Arizona College of Law where she was an articles editor of the Arizona Law Review and an Ares Fellow. She also directed legal writing programs at the University of Illinois at Urbana-Champaign and Stetson University College of Law.