Share
The Legal Writing Institute Biennial Conference in Milwaukee on July 11-14, 2018 includes four panels organized by the LWI Global Legal Writing Skills Committee that may be of interest to attendees:

Click here for more information about the LWI Conference. 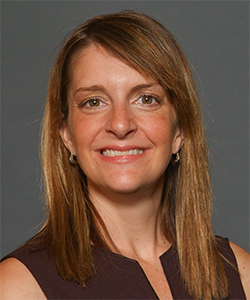 Professor Susan E. Provenzano of the Northwestern Pritzker School of Law has received two teaching awards.
First, the student body voted Sue the recipient of the Robert Childres Award.  The Childres Award, commemorating Robert Childres, a beloved member of Northwestern Law’s faculty, is presented annually to the faculty member selected by the student body as the year's most outstanding teacher.
Second, the Dean recently announced Sue would be the recipient of the William Trumbull Lectureship for the 2018-2019 academic year. The lectureship was established in 1977 by the estate of William M. Trumbull (JD '41), a member of the Law School's faculty from 1952-65.
Sue is no stranger to awards and accolades. Hired at Northwestern in 2001, as a member of its Communication and Legal Reasoning faculty, she received a Dean’s Teaching Award in 2003 and 2005, the Student Bar Association’s Faculty Appreciation Award in both 2005 and 2014, the student body award for the Outstanding Small Class Professor in 2014 and the student body award for the Outstanding 1L Class Professor in 2016.
In her time at Northwestern Sue’s teaching has also expanded beyond the Communication and Legal Reasoning Program. In addition to CLR she has taught Civil Procedure to both JD students and to LL.M.s, Torts to LL.M. students, American Legal Studies, Employment Discrimination, Employment Law, Appellate Advocacy, and Effective Legal Writing. She also served as Interim Dean of Students for a year.
Hat tip to Professor Judy Rosenbaum.
(mew)

Linda H. Edwards is the 2017 recipient of the Legal Writing Institute's Teresa Godwin Phelps Award for Scholarship in Legal Communication. Professor Edwards is the E.L. Cord Foundation Professor of Law at the William S. Boyd School of Law at the University of Nevada, Las Vegas and a nationally-recognized scholar of rhetoric and legal writing.

The Phelps Award honors individual works of outstanding scholarship specific to the legal writing discipline that are published in any given calendar year. The award is meant to set aspirational standards for others writing in the field. In making the award, the Selection Committee and the LWI Board focus solely on whether an individual work is specific to the discipline of legal writing and on whether it makes an outstanding contribution to the discipline.

The Phelps Award supports LWI’s discipline-building priority. Naming the award in honor of Terry Phelps recognizes her consistent support for and encouragement of others’ scholarly work and her own exemplary scholarship in narrative, international human rights, and legal rhetoric, including the foundational article that nourished and influenced all subsequent study of the field, The New Legal Rhetoric, 40 Sw. L.J. 1089 (1986). This article was the essential introduction to the idea that legal writing was itself a field worthy of serious study.

The LWI Selection Committee unanimously recommended Professor Edwards for the Phelps Award to recognize her 2017 article, “Telling Stories in the Supreme Court: Voices Briefs and the Role of Democracy in Constitutional Deliberation,” published in Volume 29 of the Yale Journal of Law and Feminism. It is the first scholarly article to address the recent explosion of narrative briefs filed by non-parties in cases pending before the United States Supreme Court, which she calls “voices briefs.” The letter nominating Professor Edwards’s article explains: Linda situates the briefs as policy that the Court can—and should—consider and illustrates how such stories can persuade by allowing justices a peek at the impact of laws on real lives, lives that may be outside justices’ own experiences. Linda gives advocates a theoretical, scholarly basis to support their decision to use voices briefs and gives the legal writing community the language to use and scholarly grounding to teach students about another way to persuade.”

The award will be presented on Friday, July 13, 2018, during the Gala Dinner at the LWI Biennial Conference in Milwaukee, Wisconsin.

Illinois has become the 30th state to adopt the Uniform Bar Exam ("UBE"). The UBE is a national test that allows the transfer of scores between states.