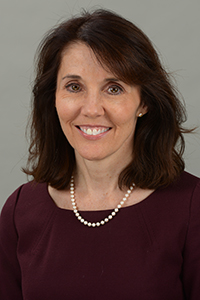 Professor Julie Spanbauer, a lawyering skills professor at The John Marshall Law School in Chicago, has been named as the law school's Vice Dean for Academic Affairs. She had previously served since 2015 as Associate Dean for Faculty Affairs.

After graduating from Valparaiso University Law School, Julie Spanbauer served as a federal judicial clerk for the U.S. District Court for the Northern District of Indiana. She also earned an LL.M. from Northwestern University School of Law.

Since joining the John Marshall faculty in 1990, she has published numerous articles in the areas of employment discrimination, constitutional law, and women's issues. She was named a Fulbright Specialist and taught at the Institute of Technology Law, National Chiao Tung University in Taipei, Taiwan.

She is a frequent and popular speaker on various panels, including presentations at legal writing conferences and the Global Legal Skills Conference.

She has lectured in Ireland and in China. She served as the program director for two programs sponsored by the International Law Institute in Washington, D.C. to prepare international LL.M. students to enter law schools throughout the United States. She also served as a member of the board of directors of the Friends of Battered Women and their Children, a not-for-profit organization providing counseling, advocacy, and education services for abused women and their children.

Congratulations to Vice Dean Spanbauer on her new appointment.