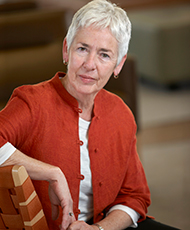 The Association of Legal Writing Directors ("ALWD") has established the Linda Berger Lifetime Achievement Award for Excellence in Legal Writing Scholarship. The award is named for the initial recipient, Linda Berger.

Linda Berger is the Family Foundation Professor of Law at the University of Nevada at Las Vegas. Her research, writing, and teaching converge on the study and practice of legal rhetoric, drawing on cognitive psychology as well as on composition, rhetoric, metaphor, analogy, and narrative theory. She is one of the co-editors of U.S. Feminist Judgments: Rewritten Opinions of the United States Supreme Court (Cambridge 2016), the first volume in an ongoing series.

Professor Berger has been a leader in discipline building and professional development initiatives within the national legal writing community. She served as President of the Legal Writing Institute (LWI) from 2014-16, President-Elect from 2012-14, and a member of the LWI Board of Directors from 2008-11 and from 2012 to the present.  Professor Berger was a founder and the long-time editor-in-chief of Legal Communication & Rhetoric: JALWD; served on the editorial board of the LWI Monograph Series for six years; initiated and continues to co-edit the Law & Rhetoric e-Journal on SSRN's Legal Scholarship Network; and was one of the first ALWD Visiting Scholars in Legal Communication & Rhetoric. She also is a former member of the national board of directors of ALWD.

This award will be given every two years at ALWD’s Biennial Conference. This award focuses solely on scholarship. It celebrates those who have written influential articles, books, or essays, and otherwise had a major impact on scholarship, perhaps through making presentations, mentoring, serving on editorial boards of various publications, sponsoring scholarship workshops and fora—virtually everything related to scholarship.

Here is an excerpt of remarks that Professor Wanda M. Temm gave about Linda at the 2017 Biennial Conference last week at the University of Minnesota Law School in Minneapolis:

Without a doubt our rock star in legal writing scholarship, this modest lady, as that is how we all think of her, is humble, relaxed, warm, charming, and humorous—to list only a few of her many characteristics.

Indeed, her prolific work established legal writing within the legal academy as a true discipline with a doctrinal foundation on which to build its own body of scholarly literature.

Moreover, she has been generous in her efforts to support other scholars in the field, leading presentations, and workshops about legal writing scholarship, and helping new scholars find their voice.

There is perhaps no other individual in our community that has had the same profound impact on the discipline of legal writing than our recipient.

Indeed, this person spearheaded the creation of ALWD’s peer-reviewed journal: the Journal of the Association of Legal Writing Directors, now known as Legal Communication & Rhetoric: JALWD.

The ALWD Board of Directors is honored to create and present the 2017 Linda Berger Lifetime Achievement Award for Excellence in Legal Writing Scholarship to none other than Linda Berger.

Congratulations to Linda Berger and to ALWD.