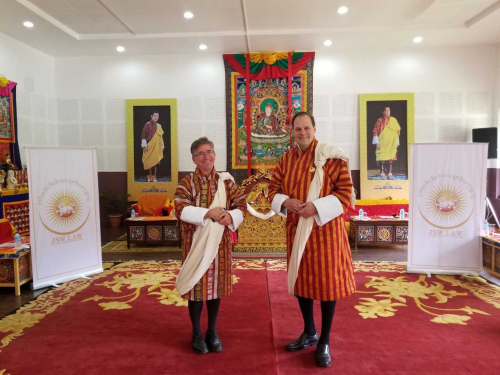 At a formal ceremony attended by many dignataries, the Jigme Singye Wangchuck School of Law (JSW Law) in Bhutan presented its first batch of 25 students at its temporary academic campus at Taba, Thimphu on Saturday, July 29, 2017.

The ceremony marked the start of the five-year undergraduate programme in law and the completion of the bridging course that began on July 3, 2017. The Class of 2022 consists of 25 students, who were selected from 499 applicants. The students were chosen according to a process that included of their Grade XII BCSEA national examinations, their score on a custom-designed law school admission test (LSAT), and their score in a personal interview with members of the JSW Law faculty.

There are 13 women and 12 men in the class and they hail from 15 of Bhutan's twenty Dzongkhags. They also represent 19 of Bhutan's 58 Higher Secondary Schools and Central Schools.

The students were presented to the Honorable President, followed by Zhudrey Puensum Tshogpa. The event concluded with Tashi Lebey and the blessing of the campus by the Vairochana Rimpoche.

Upon the Royal Command of His Majesty The King, the nation’s first law school, JSW Law, was founded as an independent, autonomous tertiary educational institution. His Majesty granted the Royal Charter for the institution on February 21, 2015, envisioning JSW Law as a world-class law school that promotes Bhutanese culture, traditions, and customs and complements wider efforts to develop long-term legal capacity and institutions in the Kingdom of Bhutan. JSW Law is supported by the Royal Government of Bhutan, the Government of India, the international law firm White & Case LLP, the U.S.-based Karuna Foundation, and the Austrian Development Agency. The U.S.-based Fulbright Commission has also sent two Fulbright specialists to the campus.

The first-year curriculum includes a course in Legal Composition and Rhetoric, part of a three-semester legal skills program at the new school.

PHOTO: Legal writing professors David Austin (California Western School of Law) and Mark E. Wojcik (The John Marshall Law School-Chicago) in traditional dress, in a photo taken after the ceremony to formally open the school. Professors Austin and Wojcik are Fulbright Specialists working at the law school until October. Photo by Judy Stark.

Conference photos are available by clicking here. You can also search social media posts for #ALWD2017.

Registration is now open for the Western Regional Legal Writing Conference to be held at Seattle University School of Law on August 25 and 26, 2017.  Although there is no registration fee, the organizers need a headcount, so please register here.

The theme for the conference is “connections” including the following:

Those themes will be explored in 24 sessions involving presenters associated with 17 law schools across the country. In addition, making the connection to practice and to current events, attendees will hear from Washington State Deputy Solicitor General Anne Egeler, who will give us an insider's view into the Washington v. Trump et al. litigation. Attendees will also hear from local practitioners at the Microsoft Corporation with their views on the skills that law graduates need for successful entry into practice.

You can find a detailed program for the conference here. Information about hotel accommodations and  on-campus dorm rooms is available on the conference website.

Scribes -- The American Society of Legal Writers -- will be moving its national headquarters from Texas to The John Marshall Law School in Chicago. Since 2015, its executive office has been located in Texas at the Texas Tech University School of Law. Before that, it was located in Michigan at the Western Michigan University Thomas Cooley Law School.

Scribes is dedicated to encouraging legal writers and improving legal writing throughout the entire legal community. Founded in the 1950s, Scribes is the oldest organization of its kind. It has almost 2,700 members, including state and federal judges, practicing lawyers, law-school deans and professors, and legal editors. As written in its Constitution, Scribes's goals are:[

Scribes has both individual and institutional members (including law schools and courts). There are also (so far) two Student Chapters of Scribes -- one at Texas Tech University School of Law and the other at The John Marshall Law School. In 2007, Scribes created the National Order of Scribes to honor graduating law students who excel in legal writing. Each year, every law school that is an institutional member of Scribes may nominate law students to be inducted into the National Order of Scribes.

Save the Date: The New England Consortium of Legal Writing Teachers

The New England Consortium of Legal Writing Teachers will hold its annual conference on Friday, October 27, 2017 at the University of Connecticut School of Law, in Hartford.

If you're attending the Legal Writing Institute's Applied Legal Storytelling Conference this week at American University Washington College of Law, we invite your summaries of interesting panels and presentations to share with readers of this blog. We know that you know how to tell stories, so tell us yours!

Congratulations to the conference presenters and organizers.

Registration for the 2017 ALWD Conference, Acknowledging Lines: Talking About What Unites and Divides Us, will be held at the University of Minnesota Law School in Minneapolis, Minnesota, from July 19-21, 2017. Speaker details and a link to the registration page are available on the conference website.

Washburn is Hiring an Assistant Director of Academic Support and Bar Readiness.

The Washburn campus is located in the heart of Topeka, Kansas, blocks from the state capitol. Recently, the Topeka and Shawnee County Library was named the 2016 Library of the Year, the highest honor for libraries in the U.S. and Canada. Topeka has previously been named a Top Ten City in Kiplinger’s magazine. Topeka features affordable housing and beautiful, historic neighborhoods filled with well-maintained parks. It is also the home of the Brown v. Board of Education historical site.

Required Qualifications: Juris Doctor degree from an ABA approved law school, with a strong academic record, and successful completion of a bar exam. Background demonstrating a potential for excellence in academic support. Understanding of legal pedagogy including current trends. Strong oral presentation skills and ability to remediate complex legal rules. Excellent written communication and legal writing skills. Ability to manage multiple tasks and meet deadlines. Demonstrated ability to work with a diverse student body and work collaboratively with faculty and staff. Proficiency with Microsoft Excel and PowerPoint. Must have passed a state or uniform bar exam and hold a current license to practice law.

Application Procedures: Submit a letter of interest, resume, Resume Supplement form (available at //www.washburn.edu/hrforms), copy of unofficial transcript(s) for highest level of postsecondary education (official transcript for all levels of postsecondary education may be requested upon hire), and names and phone numbers of three professional references to getajob@washburn.edu or to Washburn University Human Resources, 118 Morgan Hall, 1700 SW College, Topeka, Kansas 66621. Applicants are encouraged to submit complete applications by July 17, 2017. Applications will continue to be reviewed until interviews are scheduled.

Salary is upper $60,000 to lower $70,000 commensurate with qualifications. Washburn provides an excellent fringe benefits package. Employment at Washburn University will be conditioned upon satisfactory completion of a background check.

Share
Congratulations to the Jigme Singye Wangchuck School of Law, the first law school in the history of the Kingdom of Bhutan. The law school is welcoming 25 fortunate law students from all across Bhutan. They begin their orientation classes today, Monday, July 3, 2017.
Opening the first law school in any country is a tremendous accomplishment. Special congratulations to the visionary Bhutanese leaders and lawyers who are supporting this new school, and to Michael Peil and Judy Stark, who have devoted several years to making this special day possible.
For those of you who would like to know  more about the school, the New York Times did a story about the law school back in October 2016.
The law school's website is www.jswlaw.bt
(mew)